You’re testing your vocal chords in the bathroom one morning and as you hit the high note in the second verse of ‘It’s now or never’, a second voice joins in – just as tuneless as you. ‘Who could it be? You think indignantly, as you pop your head around the shower curtain, only to realise – it’s your budding Elvis Pawsley, sitting outside the bathroom wagging his tail as he joins you in an interesting duet that is bound to get your neighbours’ attention. Pawsley loves a good song and will jump at the chance to join in a duet with you. Is your dog one of the few, like Pawsley, who loves to burst into a song? Then why not teach him how to do it on command – it can be great fun for your dog and you (though maybe not for your neighbours), and what better way to bond with your pooch than over a tone-deaf serenade? If this sounds like a good idea to you and poochie is wagging his tail too, then read on and learn how the two of you could earn a spot on American Idol! 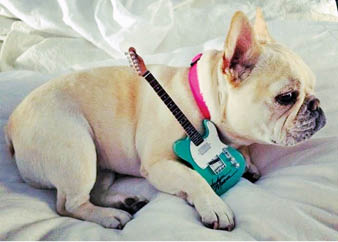 Teach Your Dog To Sing!

Many dogs naturally respond to their owners’ singing or music played on the radio or TV with a howl. So try singing to your pet, or turn up the volume when an Adele song is on and see if your pet responds. If he doesn’t, don’t worry – try changing the way you’re singing, try a different song that hits the high notes and hold the notes for longer and stretch out the last word of every chorus (you may sound like a cement mixer, but don’t fret – your dog doesn’t care). It may take a few refrains, but your dog is likely to jump in. When he does, praise him enthusiastically and maybe even reward him with a treat. You can also wait for your dog to naturally howl (most dogs do when they hear a siren or other dogs barking in the distance) and then quickly reward him for it. Eventually, you can put the howling on to a command and then get your canine to croon with you.

Though dogs mostly howl and don’t really sing, there are a few breeds like the New Guinea Singing Dog that have a propensity for song. According to experts, the New Guinea Singing Dog – a close relative of the Dingo – is a mesmerising and skilled vocalist. Sonograms show its vocalisations to be very different from those made by any domestic or wild dog, including the Basenji. Unlike a howl, the Singing Dog changes the tone of its voice, warbling a song to communicate with other dogs.

Why Do Dogs Howl? 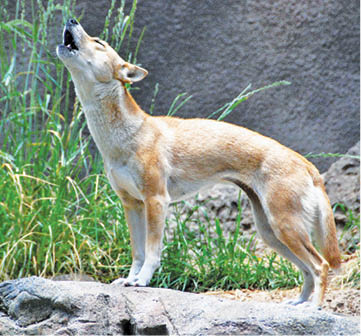 What is it with dogs and music? Does it bring out the Andrea Bocelli in them? Why do some dogs react by howling when they hear a song or a person singing? Canine experts are yet to find the answer to this perplexing question, but it is known that dogs howl as a form of communication – just as their ancestor, the wolf.  Wolves howl mostly to gather pack members before a group hunt, or to communicate with another wolf miles away. Dogs, however, are known to bark more and howl less – a result of domestication and a change in their social lives. And though howling is uncommon, many dogs will howl when they are left alone or bored. It’s their way of showing their dislike at being isolated and calling out to the rest of the pack (the family) to come to them. In the wild this howling would attract other members of the pack like a magnet. Sometimes dogs will howl when they hear sirens or other loud higher pitched sounds like clarinets and flutes. These sounds may even come from a television set. Dogs do this as an instinctive response to hearing what they interpret to be another howl (dog in the distance). And often, a person’s singing may also trigger off the howling – dogs mistake this as a signal that the owners are trying to ‘draw the pack together’ and will enthusiastically answer this call by howling along with the rest of their pack. So the next time your dog howls when you sing, he’s probably just trying to show he’s part of the group, not that your singing has gone to the dogs!

The Island of New Guinea has been home to a very unusual dingo-type dog probably from the time of the Stone Age. The animal was hidden from the rest of the world till researchers visited the island in the 1800’s and discovered the dogs. The New Guinea Singing Dog gets its name comes from its unique vocalisation, which is different from that made by any wild or domestic dog. Research has shown the singer’s larynx is constructed differently. Its call is a melodic yodelling similar to a wolf howl with overtones of whale song. When in a group, one animal starts and then others join on different pitches, each with its own unique voice together composing an alien melody that has been sung for more than 6,000 years. People who have heard them sing insist the sound is unlike that made by any other dog.