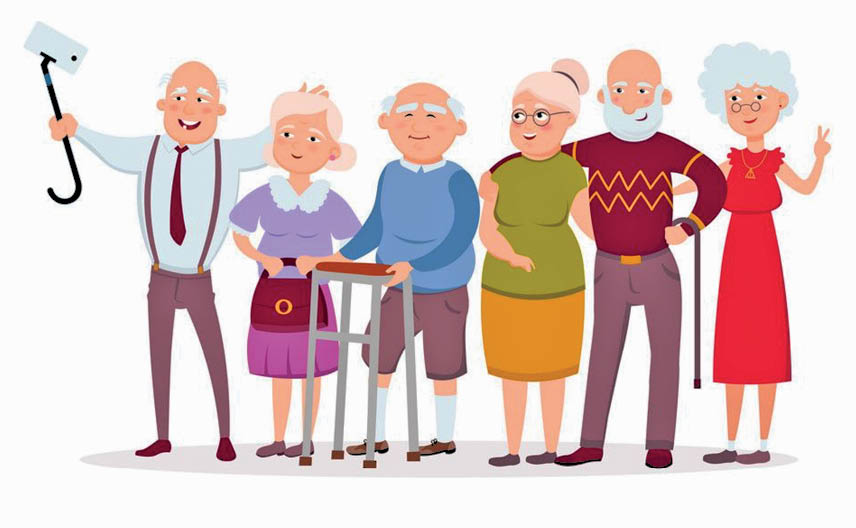 Despite her age, Meherbai always believed that just as we feed the body daily, we should give food to the brain through intellectual discussions. Hence, she requested Jabri Jaloo to organise a tea party at her club where the Mandli-members could discuss politics. Now Jaloo played her own politics by inviting her bhookhi-baaras cousin, Silloo, to the party. Silloo needed no introduction as she invited herself wherever Jaloo went! The Mandli knew there was no avoiding her and hence called her Silloo Sales-tax!

Silloo played her own brand of politics and managed to change the timing of the tea-party as well as the club-venue to suit her own selfish whims and fancies. When the Mandli agreed, both, she and Jaloo backed out giving the excuse that they were sick, just because Meherbai had requested them to drop an old Mandli member home. Hence the Mandli met at Meherbai’s house over tea.

Firuzi Feminist: Women should rule the world! Then there would be no wars.

Dorabji Dolo: Yes, Yes! If women ruled the world, there would be no wars. Only, a lot of countries not talking to each other.

Banoo Batak: You must all vote for Alibaba in the national elections. That way, you know that there will be only 40 thieves looting us!

Naju-Malai-nu-Khaju: Politics make strange bed-fellows! There are no permanent friends or enemies in politics. Those who are in Gathbandhan today, may well be at each-others gardan (throats) tomorrow!

Alamai Eienstein: At almost 90 years of age? Na re Bappa. Mahri divas ni bhookh aney raat ni oongh udi jasey! Tabiyat lathri jasey aney avarda kamti thai jasey!  I don’t mind being a member of Lok-Sabha where most honourable members fall asleep at their desks. Sleeping comes so naturally to me at my age that I can do it with my eyes open!

Putli Politician: Politics is my dream.

Themul Tarzan: What are you saying? Actually, every girl’s dream should be to marry a rich man.

Firozi Feminist: No! It’s every girl’s dream to eat whatever she wants and not get fat!

Vikaji Vandro: Arrey! I’m still an eligible ‘boy’ of 60! I’ve so much spirit of adventure in me, and I travel so much that everyone calls me Vikaji-Vasco-Da-Gama. I shall take my wife for honeymoon from Girgam to Goregaon as I know all the routes from Pit to Pat!

Keki Khadro: Don’t even think of marriage. Sukhi jeev dukhi thai jasey! Yesterday, I told my wife, “You are negative!” She pounced on me like in Tom and Jerry, saying, “And you are a khadro, kanjoos, sickly, living off my inheritance money, selfish, miserly, and stupid.” Actually, I was just informing her that her Covid test was negative but she didn’t let me complete my sentence and subjected me, as usual, to a torrent of verbal abuse. In fact, my marriage is worse than politics. When there’s Motta bota nu dhansak on Sundays, all I get is harkas and if I dare ask for a teeny-weeny bota, the wife retorts, then what will our ‘Rover’ eat ? Then again, she knows that I have high blood pressure, yet she makes everything over-salty.

Meherwanji: We are here to discuss politics and not your unhappy marriage, so can anyone tell me, on a lighter note, what’s the difference between an ordinary thief and a politician?

Alamai Eienstein: An ordinary thief steals your purse, money, car, watch or jewellery. But a politician steals your trust, faith, career, health and future. Also, we don’t choose an ordinary thief, but by voting for the wrong candidate, we choose who robs us and we ACTUALLY fight among ourselves to defend the politician who robs us. Of course, I am referring to State and National politics, where the elected have the power to levy unfair taxes on us and cut our Savings interest.

Dinsoo Derko: Wah!! Our entire Mandli has become an expert on politics and politicians!! Previously, we were all Covid experts!

Bomanji Banga: Arrey! Do three Tachakris to keep Covid away! Now that all international flights are open, it threatens to come back. Look at the situation in China, Hong Kong and South Korea. There’s so much of Covid there. Now with the airlines re-inducting their old flight schedules, the spread of Covid reappearing is a possibility and we have to be doubly careful.

Bomanji Banga: I am being realistic and practical.

Meherwanji: We are once again digressing from politics to other altu-faltu subjects like Keki’s unhappy marriage and Covid. I’ll tell you a witty and true story! During World War Two, Winston Churchill’s son-in-law asked him why he admired the Italian dictator, Mussolini, so much. To which Churchill replied, ‘because he had the guts to shoot his son-in-law’!’

His wife, Hasti Hilla: A writer has said that politics is the last refuge of scoundrels.

Manchershaw Money-bags: That’s because everyone joins politics with the idea of making a quick-buck. No one is really interested in public welfare!

Polly Pendo: No wonder, the good, honest and hardworking people are afraid to join politics. You can’t fight the system. We ourselves choose our own poisons and seal our own graves by voting for the wrong candidates. It’s so important to vote for the right person.

Meherbai: However, it’s so wrong to paint all politicians with the same brush. There are good ones also who do a lot for the people!!

By now, all the pastries, puffs, vadas, sandwiches and samosas were demolished, so the Mandli parted with their usual kisi-koti-tata-bye-bye!