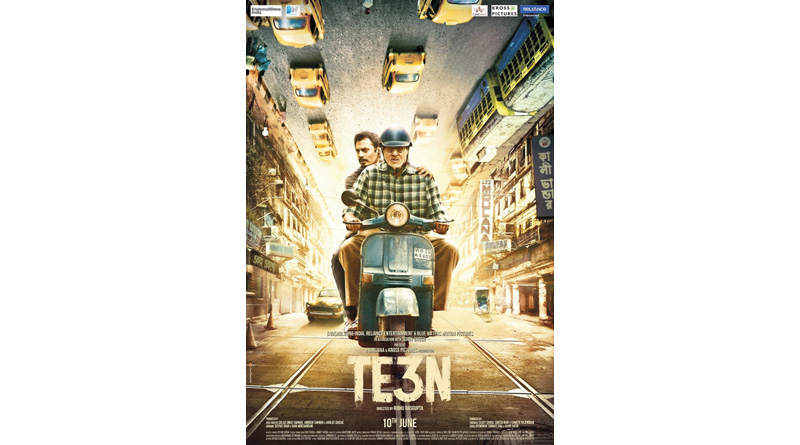 At 73, and after 47 years in the industry, the consummate Amitabh Bachchan has nothing left to prove to his fans. He’s done the gamut of roles—and emotions. Sujoy Ghosh, after having helmed the hugely successful 2012 thriller ‘Kahani’, now turns producer, leaving the direction to Ribhu Dasgupta whose only feature so far was the 2011 ‘Michael’.

The quaintly titled Te3n, adapted from the 2013 Korean ‘Montage’, is the story of a dejected and disillusioned but not defeated, John Biswas (Amitabh Bachchan) whose 8-year-old granddaughter Angela was kidnapped, with the case lying unsolved in the police files. Both the investigating officers, Sarita Sarkar (Vidya Balan in an extended guest appearance) and Martin Das (Nawazuddin Siddiqui) were left deflated, with Das turning to priesthood.

But, eight years later, when a child Ronnie goes missing, both Sarkar and Das, who’s drafted in to aid investigations discover analogous trademark patterns in both the cases .

The powerhouse trio of Amitabh, Vidya Balan and Nawazuddin should have set the screen on fire; sadly the film promises much but fails to rise to dramatic heights.

While the background score, so vital in this genre, is passable, the songs do nothing to aid the film’s narrative. Amitabh Bachchan, as the granddad who’d never given up hope, displays dogged tenacity, Vidya Balan, after ‘Kahani’ is at hope in the Kolkata setting of Te3n. But, in a tailor-made role, it is Nawazuddin as the cop-turned-priest-turned part-time cop/priest who turns in a masterful performance— and with amazing virtuosity.