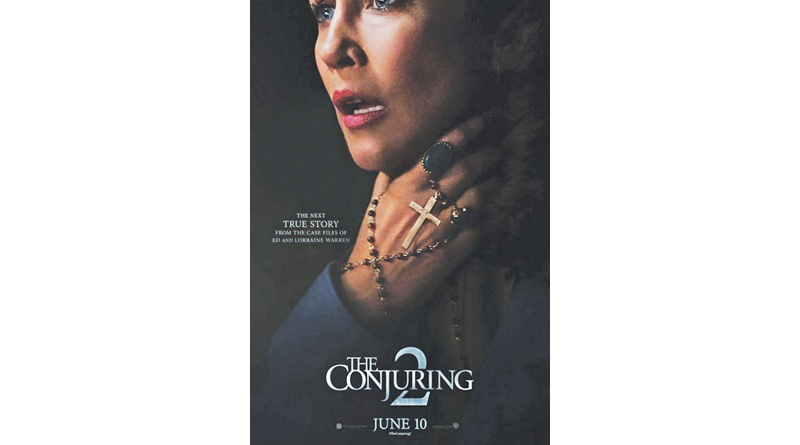 ting, A-haunting we go’ is the motto of the master of shocker flicks James Wan, in this sequel to the 2013 ‘Conjuring’.

Vera Farmiga and Patrick Wilson reprise their earlier roles of wife–husband paranormal investigators Lorraine and Ed Warren. The film begins with the couple conducting a séance in Amityville. While on the job, the psychic in her serves a grave warning: any more of this and her husband’s life would be compromised. Loving hubby agrees.

Cut to 1977 in Enfield, England where a harried single mother-of- four Peggy Hodgson (Frances O’ Connor) is convinced that her 11-year-old daughter Janet (Madison Wolfe) is possessed by the demonic spirit of a man who was once a resident of the house. Extensive TV and media reports are the cause for the Warrens to be persuaded by the Church to give up their self-imposed hiatus.

James Wan initially does an admirable job of intercutting the American and British segments. There are just a couple of genuine goose-pimpled jump scares, and the set-up on the whole is a familiar premise. The predominant elements of the horror genre abound —people and objects being flung around the room, TV channels switching around by themselves—-But the more engaging moments in the film are when the skeptics who apparently have an answer for everything, proffer evidence that the entire incident is a hoax. Wan is well aware that most successful films end up with sequels and shows in ample measure that he has his figure on the pulse of the horror genre.