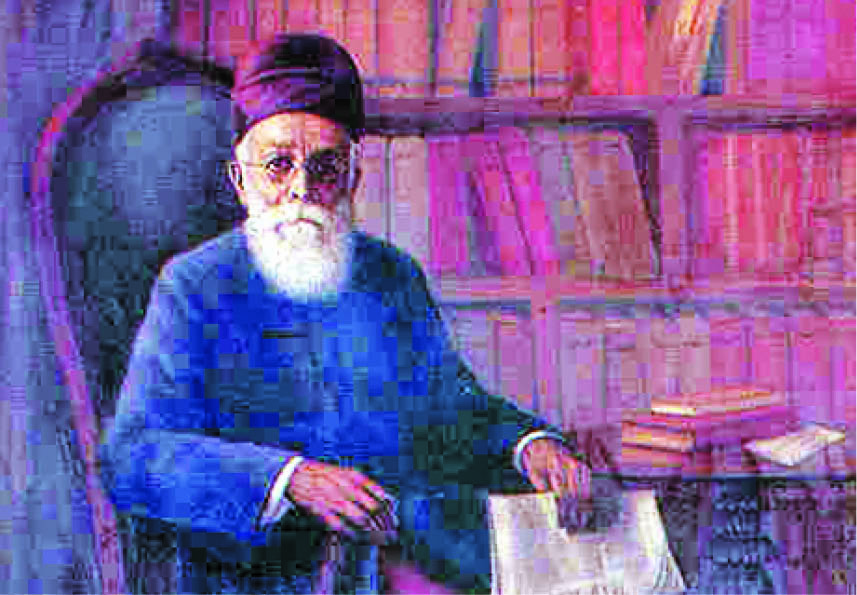 Dadabhai N Dordi was born on 4th September, 1825 in the priestly family of Manekbai and Naoroji Pallanji Dordi. He lost his father at age four and was brought up by his mother who raised him to go down in Indian history as one of the most dynamic individuals – ‘Dada’, the ‘Pita-maha’, the ‘Grand Old Man of the Nation’, the first Asian to be elected to the August House of Commons of the British Parliament… and lots more. All Indians, and especially us Parsis fondly and proudly know him as Dadabhai Naoroji. Dadabhai was a devout Zoroastrian, a fearless man, a courageous fighter, a magnetic personality, a great orator, an educator who firmly believed in women-empowerment, a patriot and a freedom fighter.

In keeping with the then Parsi customs, at age 11, Dadabhai was married to 7-year-old Gulbai and went on to have three children, one son and two daughters. Post matriculation, Dadabhai joined the Elphinstone Institution, (currently Elphinstone College) doing a Masters in Mathematics. At the age of twenty five he was appointed Assistant Professor, and four years later Professor of Math and Natural Philosophy at Elphinstone Institution – the first Indian to do so. His dynamism earned him ‘the Promise of India’ title by a fellow professor. Sir Erskine Perry, the President of the Education Board offered to send Dadabhai to England to study at the Bar by paying half the expenses if the community members would raise the remaining half. Unfortunately this did not materialize as the community elders feared he might marry an Englishwoman or convert to Christianity in England.

After a short but successful stint as Professor, he left for England in 1855 to manage ‘Cama & Co’, and realized the English were ignorant about India. He believed it would greatly advantageous to India if the British were made to understand their responsibilities as rulers. Insomuch, he started the London Indian Society. He returned home in 1869 to a warm welcome and was presented a handsome purse –  which he utilized for public projects. He shortly returned to England to present the Parliamentary Committee on Indian Finance, pointing out that the low per capita income of a measly Rs. 20 invited the wrath of the Anglo-Indian officials. He wrote, “the deplorable drain [of Indian wealth by England], besides the material exhaustion of India, the moral loss to her is no less sad and lamentable… All [the Europeans] effectually do is to eat the substance of India, material and moral, while living there, and when they go, they carry away all they have acquired,” summing his theory of India’s wealth drain. Dadabhai fearlessly carried on his agitation, presenting this ‘Drain Theory’ to the British in a pamphlet titled ‘Poverty of India’ in 1873, which he later revised in greater detail as a published book titled ‘Condition of India’. His stand was later vindicated when the Indian Finance Minister, Lord Evelyn Baring, declared that the per capita income was indeed Rs.27/-.

On his return to India in 1874, he served as Bombay’s Member of Municipal Corporation (1885-1888) and founded the Indian National Association, Calcutta, before the founding of Indian National Congress (INC). The Association and Congress had the same objectives and practices and were merged to form the first Indian National Congress in 1885, comprising 65 members. Naoroji was elected President in 1886 and again in 1893 and 1906, when he expressed the Congress’ demand for self-rule or ‘Swaraj’, a term her popularised.

Later, that year he once again left for England, which was in the throes of a General Election, and managed to get himself accepted as the Liberal candidate but suffered defeat based on the twin advantages of being liberal and a ‘black-man’. However, he recontested and was elected to the House of Commons (British Parliament), becoming the first Indian and Asian to do so. During his swearing-in, Dadabhai refused to take the oath of office on the Bible and did so upon his copy of our holy Khordeh Avesta. During his tenure he persistently presented his Drain Theory to the British, reminding them that India’s massive, ever-increasing was due to the enormous drain of 30 million Sterling Pounds from the country, ‘without a pie in return’.

1895’s General Election heralded the defeat of the Liberal Party and consequently Dadabhai’s seat. This was greatly disastrous for India. Dadabhai returned to India in 1906 to preside over the Indian National Congress (Calcutta), spending his last eleven years in India at his Versova Bungalow (Andheri, Bombay). Globally, people flocked to him and his house become a place of pilgrimage by Indian freedom fighters. He was a mentor, philosopher and a guide to the young Indian Nationalists as well as to the giants of our freedom movement including Gandhiji, Gokhle and Tilak, who sought his blessings and advice.

During World War I, Dadabhai supported the cause for Britain, pointing out that it was the supreme duty of his countrymen at such a difficult time. Both, the British and the Indians wanted knighthood be conferred upon Dadabhai, but he refused, just as he declined accepting the honour that the Shah of Iran wanted to bestow upon him. Dadabhai received innumerable good wishes from the British Empire on his Birthday every year on 4th September. His ninety-first birthday was celebrated by people all over India. He even received a telegram from the viceroy Lord Hardinge.

In 1909 his 73-year-old lifelong companion Gulbai passed away. In 1901 in ‘The Days of My Youth’, he had complimented her saying, “She made me what I am.” In June 1917, Dadabhai’s had to be hospitalized due to his deteriorating health and breathed his last on 30th June, surrounded by his daughters and grand-children, leaving behind a bereaved family and nation. Over fifteen thousand people of all faiths and nationalities joined the funeral cortege. Dadabhai’s granddaughter Khurshid continued the work of her grandfather by involving herself in the freedom struggle.

On his being fondly called the ‘The Grand Old Man of Indian Nationalism’, he quipped, “Is it vanity that I should take great pleasure in being hailed as the Grand Old Man of India? No, that title, which speaks volumes for the warm, grateful and generous hearts of my countrymen, is to me, whether I deserve it or not, the highest reward of my life.”

A glowing tribute to the Grand Old Man of India came from Sir Narayan Chandavarkar, “It is no exaggeration to say, it is not marring the beauty of the religion to say that he was the second Zoroaster sent to India to make the sun of righteousness and India’s future progress shine more and more by means of our pure thoughts, our pure words and our pure deeds.”

In a letter to Dadabhai in 1894, Mahatma Gandhi wrote, “The Indians look up to you as children to the father. Such is really the feeling here.” A year later in another letter he wrote, “I am yet inexperienced and young and, therefore, quite liable to make mistakes. You will, therefore, oblige me very greatly if you will kindly direct and guide me and make necessary suggestions which shall be received as from a father of his child.”

Lokmanya Tilak said, “If we twenty eight crore of Indians were entitled to send only one member to the British parliament, there is no doubt that we would have elected Dadabhai Naoroji unanimously to grace that post.” Sir Narayan Dhabolkar once referred to him as “The perfect saint is he who is a perfect citizen.” Sarojini Naidu praised his life as one long and noble consecration to the Motherland.

The Grand Old Man of Indian Nationalism has been honoured across countries – stamps and coins have been issued with his visage; Bombay University conferred upon him the honorary degree of  Doctor of Law at a special convocation presided by Lord Willingdon. His portrait stands prominently in both – the Indian and the British Parliament House. His statue stands at Dr. DN Road – a heritage area named after him – as is the area of his residence (Andheri, Mumbai), named DN Nagar. Additionally, a colony of government officials in Delhi is named Nauroji Nagar; there is also a Dadabhai Naoroji Road in Karachi and a Naoroji Street in the Finsbury area of London, and the Finsbury Town Hall houses a Plaque in his reference.

Dadabhai Naoroji’s love for freedom and patriotism is summed up best in his words, “Indians were British citizens with a birthright to be free, every right to claim an honorable fulfillment of our British pledged rights. It is futile to tell me that we must wait till all the people are ready. The British did not wait for their parliament. Self-government is the only and chief remedy. In self-government is our hope, strength and greatness. I am a Hindu, a Muslim, a Parsi – but above all, an Indian First.”