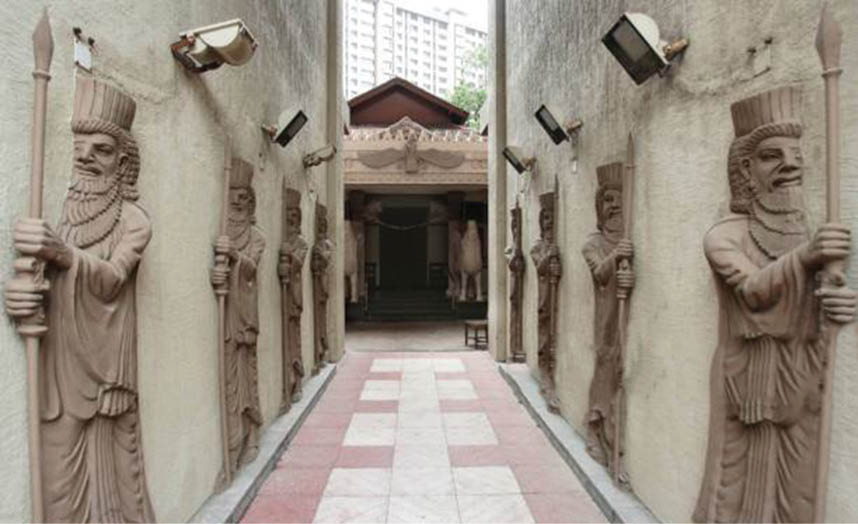 The twelfth anniversary of the renovated Muncherji Jamshetji Wadia Fire Temple at Lalbaug was celebrated on Meher Mahino – Meher Roj, February 28th, 2019. The auspicious event was organized by Chairman of the Fire Temple Trust – Kersi Limathwalla; Trustee Dara Mehta and Director of the Structural Religious course – Er. Dr. Ramiyar Karanjia. Eleven Mobeds, led by Panthaky Er. Kersi Bhadha, performed a Jasan and chasni was distributed amongst the huge gathering in the spacious air-conditioned hall on the upper floor, where the programme was compered by Roxanne Desai. The dais was graced by Er. Dr. Ramiyar Karanjia, Limathwalla and Dara Mehta. Tehmtan Karma, the Secretary of the Trust, diligently assisted and supported the programme which began with Jamshed Kotwal singing a Monajat in veneration of Ahura Mazda and the Amesha Spentas.

Roxanne Desai introduced Kersi Limathwalla, whose vision for religious enlightenment of the community set the ball rolling for the Structured Religious Course which are being conducted by Director Er. Dr. Ramiyar Karanjia since 2008, with a rapidly increasing number of Zoroastrian devotees regularly attending the course. Limathwalla warmly welcomed the crowd, expressing joy that the Structured Religious Course had entered its twelfth year. He shared interesting insights into the ‘Thinking Mind’ and how only humans have been gifted with the intellect to distinguish right from wrong; about the Gathas, the voice of Conscience and the consequence of our actions or karma.

Er. Karanjia spoke on the importance of Meher Mahino, Meher Roj, and sharing knowledge about Meher Yazad – the Angel of Justice and his counterpart Mithra – the Angel of Knowledge quintessential for humans to live in peace and harmony. He shared how Avesta classes had been ongoing for 150 years under the auspices of the BPP and that ten students had cleared their Masters in Avesta and Pahalvi languages. These ten people were then awarded prizes by Limathwalla and Dara Mehta.

Roxanne Desai was felicitated by Limathwalla who commended her efforts for the Structured Religious Course. Next, the children rendered a Monajat and a peppy song for ‘Navroz Mubarak’. They were presented gifts by Er. Karanjia who also devised a fun and much-enjoyed Quiz titled ‘Kaun Banega Champion’, which was conducted by Darayus Desai, between five teams namely ‘Bahman’, ‘Ardibahesht’, ‘Shehrevar’, ‘Khordad’ and ‘Amardad’ – comprising students of the religious course. The winning Team Ardibehesht was awarded prizes by Limathwalla. This was followed by songs sung by Jamshed Kotwal and other singers and a vote of thanks by Roxanne Desai. The event concluded with dinner catered by Jimmy Gadiwalla.