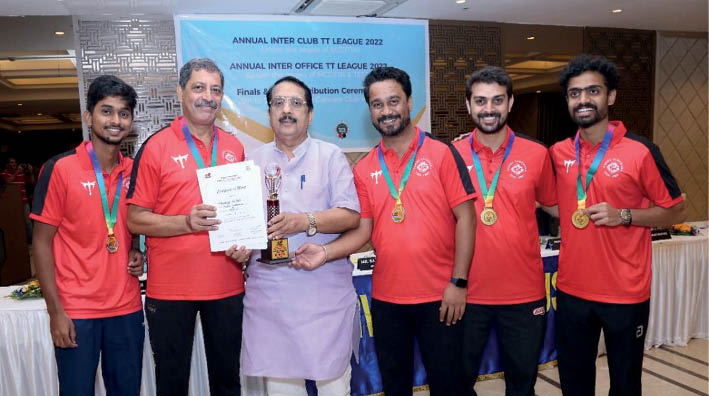 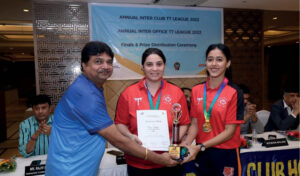 Both, the men’s and women’s teams of Mumbai’s Parsee Gymkhana (PG) steamrolled to even more comprehensive victories in the prestigious First Division of the Mumbai City District Interclub Table-Tennis tournament, held at the Garware Clubhouse, from 5th – 9th July, 2022. While the men’s team made an ­enviable hat-trick, having won the previous two editions, the women’s team won it for the second successive year.

On 6th July, PG were up against two formidable opponents – MLWB and Hindu Gymkhana (HG). While the former were blanked 3-0, the tie against neighbours Hindu Gymkhana proved to be a thriller. Youngsters Parthav Kelkar of PG and Havish Asrani of HG competed in the opening match, where Havish helped his team take a crucial 1-0 lead. The next match was the cynosure of the spectators, with two former India ­­internationals Silver medallists (2021 Senior Nationals) Siddhesh Pande of PG and Omkar Torgalkar of HG, battling it out. With his deceptive serves and excellent blocking, Siddhesh proved his supremacy, equalising for PG in three straight games.

Next, Zubin Taraporewalla gave PG a 2-1 lead, beating Saurabh Mohite. Omkar needed to defeat Parthav to keep HG in the running. With two games down and 8-10 in the third game, Parthav counter attacked magnificently not only save the two match points, but to also win the match and tie for PG. The rest of the matches against the two YMCA teams and Garware Clubhouse went PG’s way, as expected.

It’s indeed a matter of pride for Parsee Gymkhana that former India International Sanish Ambekar, who had represented PG in the previous tournament, and now settled in Australia, was crowned the Australian National Table-tennis Champion last week.

Hosts Garware Clubhouse spared no effort in organizing this annual tournament. The loudest cheers at the Prize distribution were reserved for Sharad Grover – MCDTTA committee member and Table-tennis mentor to Garware Clubhouse, which had fielded a total of 10 teams in the tournament across all Divisions.