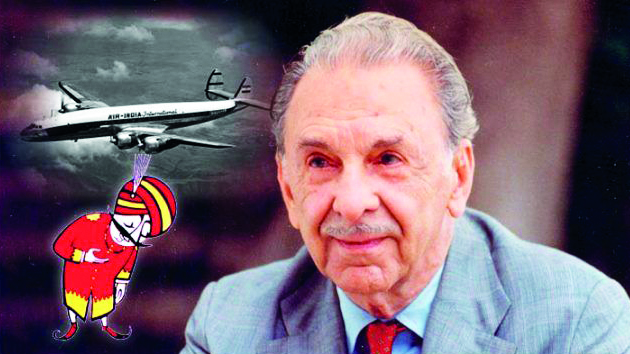 July 29, 2022, marks the 118th birth anniversary of Jehangir Ratanji Dadabhoy Tata, popularly known as ‘JRD’- the Father of Indian Aviation, Founder of many Tata companies the longest-serving Chairman of the Tata Group and a hero of Indian business. 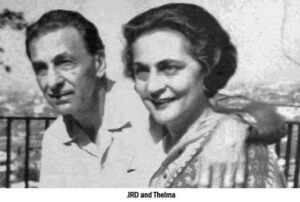 He continues to reign as the most renowned Zoroastrian on the planet. His was not a story of simply carrying forward the family name and business… he, quite literally, reached for the skies, and worked his way into pioneering and achieving unparalleled success in his ventures, creating a legacy that awed the world.

JRD was born in France and was a French National. His mother being French, he spent his early childhood in France – including his education and spent a year doing mandatory service in the French Army. He returned to India at the insistence of his father, entering Tata Sons at the age 21, in the capacity of an unpaid apprentice. His father passed away within a year of his return and JRD found himself on the board of Tata Sons at 22 years of age. 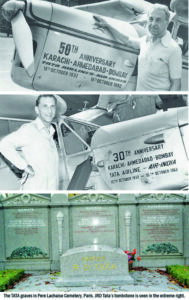 In 1938, at the age of 34, he took over as Chairman of the Tata Sons Board from Sir Nowroji Saklatvala to embark upon a period of expansion that witnessed the unparalleled rise of the Tata Group into an industrial conglomerate that received global attention. Having started with 14 companies under the Tata Sons umbrella, JRD augmented that number nearly seven times over, to 95 companies over 50 years, retiring in 1988 – ensuring a strong presence of Tata Group across key sectors including chemicals, automobiles, hospitality, cosmetics, tea and information technology. 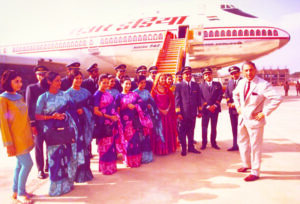 The first of JRD’s big adventures in business was born of his childhood fascination for flying. In 1929, he obtained his commercial pilot’s license – the first ever issued in India – with his license numbered ‘1’! To this day, Indian pilots are issued licenses as a sequence following that ‘License No. 1’. When the Tata headquarters received a proposal to start an airmail service that would connect Bombay, Ahmedabad and Karachi, the enthusiastic JRD had to fight a tough battle to convince the then Chairman, Dorabji Tata, to take on the initiative. 1932 was the year of the first historic flight of the Tata Aviation Service, when JRD at the controls of a Puss Moth lifted off from Drigh Road, in Karachi. It was later named Tata Airlines and then Air India.

JRD was the driving force behind the branding of the airline and the creation of the iconic Air India ‘Maharaja’. He suffered a major disappointment when Air India was nationalized by the Indian government in 1953. Though he and Nehru were friends, he could not reconcile with the socialist politics of the time. Even so, he magnanimously accepted Nehru’s offer to continue as the head of the national carrier till 1977 and managed to insulate it from the red-tape and petty politics that governed other public enterprises.

JRD played a critical role in increasing India’s scientific, medical and artistic quotient. The Tata Institute of Fundamental Research, the Tata Memorial Hospital, the Tata Institute of Social Sciences, the National Institute of Advanced Sciences and the National Centre for the Performing Arts, each an exemplar of excellence in its field, were projects that would not have come to fruition without JRD’s steadfast support. JRD was committed to advancing India’s scientific and economic capacities.

JRD was one of the few industrial magnates who appreciated talent over lineage, hiring efficient professionals to run his various businesses. Under his astute leadership, talent was always encouraged and the staff was treated with utmost dignity and respect – a tradition which is still one of the keystones of the prime Tata business ethic.

In keeping with the tenets of our noble religion, JRD always sought to help those in need. He realized that in order for India to become a global force, we would need to eradicate poverty. Rather than indulge in casual charity, he set up the multipurpose JRD Tata Trust as well as the JRD and Thelma Tata Trust to aid disadvantaged women. Realizing the inexorable link between poverty and population, he worked tirelessly in the field and helped established what is now known as the International Institute of Population Studies.

In 1992, JRD received the United Nations Population Award, felicitating his efforts, albeit a bit late in the day. The country which became as much a part of his identity as the Tata name honoured him with the Padma Vibhushan and also India’s highest civilian honour, the Bharat Ratna. He was also awarded the French Legion of Honor, the highest award for military merits.

Despite his very public persona, JRD was a shy and reticent man. He never hankered after honours but was showered with them, to much bemusement on his part. On being told that the Indian government was thinking about giving him the Bharat Ratna, the country’s highest civilian award, he is reported to have said: “Why me? I don’t deserve it. The Bharat Ratna is usually given to people who are dead or it is given to politicians. I am not prepared to oblige the government on the former and I am not the latter.”

Self-effacing, modest, wistful and endearing are a few of the adjectives used to describe JRD. He and his wife, Thelma, whom he married after a Paris romance in 1930, did not have any children but he passed the reigns of the legendary empire he had created into the capable hands of Ratan Tata.

Few know that JRD led a rich life outside of his professional and philanthropic endeavours as well. A passionate and prolific letter writer since he was a young man, a tinkerer who loved building things with his hands, an Art Connoisseur as well as a fitness and sports enthusiast who pushed his limits—JRD was all this and more.

JRD breathed his last on November 29, 1993, at the age of 89, battling a kidney infection, in a hospital in Geneva, Switzerland. The Indian Parliament was adjourned in mourning – an honor that Non-Member of Parliaments do not receive. He is buried in the iconic Père Lachaise cemetery, put to rest amongst many peers of the Tata family and other luminaries like Jim Morisson, Oscar Wilde and Edith Piaf.