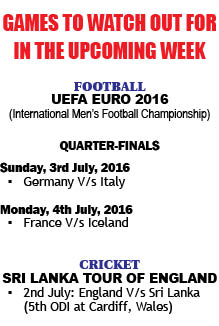 Jason Roy Shines As England Crushes Sri Lanka
Playing their 4th ODI, England and Sri Lanka were looking to outplay each other yet again. Winning the crucial toss, the Englishmen elected to field first. The Lankan Lions put up a massive score of 305 as their top order fired some big scores. In reply, England’s Jason Roy stood like a wall for his side, finishing with 162 runs after an enthralling knock. The rains did play spoil-sport in the middle. Sri Lanka managed to pick up just 4 wickets in the end as England won this encounter by 6 wickets according to the DLS method. Jason Roy was awarded Man of the Match. These 2 top sides will now meet each other for their final game in Cardiff.

Andy Murray Advances To Third Round In Wimbledon
Top tennis seed and World No. 2, Andy Murray looks to clinch yet another Wimbledon title as he beat Lu Yen-Hsun of Taiwan 6-3, 6-2, 6-1 in the second round.

Venus Williams And Kei Nishikori Move Into Third Round Of Wimbledon
Venus Williams was on top of her game as she defeated Maria Sakkari 7-5, 4-6, 6-3 and advanced to the next round of the tournament. In the men’s singles, World No. 6, Kei Nishikori of Japan outplayed Julien Benneteau of France 4-6, 6-4, 6-4, 6-2 to book his place in round number three.

Copa America: Chile Beat Argentina Via Penalties
After a hard fought contest between two great sides, the game between Chile and Argentina once again went down to the penalties scored. Chile rose to the occasion and came out on top in a 4-2 win after Messi and Biglia both missed their spot kicks, with Chile as crowned champions.

Indian Shuttlers Ajay Jayaram And H.S.Prannoy Enter Third Round In Canada Open
Ajay Jayaram beat Canada’s Martin Giuffre 17-21, 21-17, 21-13 in a 54 minute clash on court, while H.S. Prannoy also advanced to the pre quarters after defeating Mattias Borg of Sweden 13-21, 21-11, 21-15. Both of them have now moved one step closer to their titles of the Grand Prix Badminton tournament.

New Zealand Outplay Rivals India
New Zealand beat India 1-0 in the Six Nations Invitational Hockey Tournament 2016 in Valencia. It was Stephen Jenness who scored the lone goal for his team in this game.