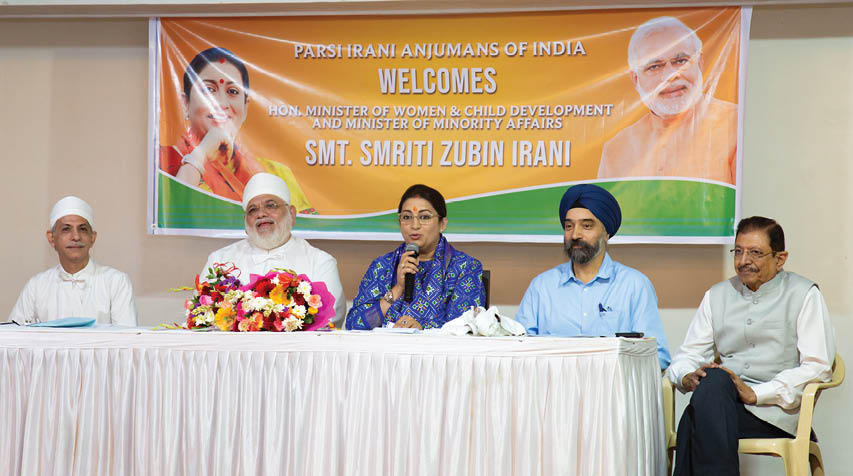 Hon’ble Minister of Women and Child Development and Minister of Minority Affairs, Smt. Smriti Zubin Irani held an interactive meeting with the heads of Parsi and Irani Anjumans across India, at the Mancherji Joshi Memorial Hall, Dadar Athornan Institute, in Mumbai, on 30th October, 2022. This initiative was organized by Vada Dasturji of Iranshah Udvada, Khurshed Kaikobad Dastoor. The event was attended by esteemed dignitaries as also the BPP Chairperson and trustees.

Vada Dasturji Khurshed Dastoor welcomed everyone with, “We are very happy and fortunate to have amongst us, a minister who is so connected and a part of our community. My association with Smriti Irani goes back to 2011 when then Chief Minister Narendra Modi visited Udvada. She later approached me as to what she could do for our community. It was very kind of her to adopt Udvada and thus we have seen its development with roads, electricity drainage system, museum and further progress with the gate and even the lake. Udvada has become a role model for other Gujarat villages. Today, as a community, we are facing lots of issues and many challenges. We are lucky enough to address all these problems through a person, we can call our very own.” On behalf of the Parsi community, Vada Dasturji Khurshed showered his blessings and then presented a token of appreciation to Smriti Irani.

Er. Dr. Ramiyar Karanjia recited a prayer on behalf of the Athornan Mandal, the premier body of priests in Mumbai. Speaking on the occasion, Smriti Irani stated, “I’m extremely grateful that Vada Dasturji has blessed us with the opportunity to engage with all of you,” thanking Dasturji for his kind words highlighting her contributions as a member of parliament. She added, “I was elated when I could speak about ‘Navroze’ during the Rajya Sabha session. These are the small nuances of our culture which need to be brought forth and communicated to the country and world.” She further highlighted that many schemes in the government were available especially for youngsters, possibly not known to the community. “For instance, graduate and under-graduate students can avail of scholarships. If a youngster wants to study overseas, loans can be given at minimal interest rates, compared to other banks. Those in the community who would like to start their own business, can also receive such monetary support and lowest of interest rates,” she informed.

Another issue she emphasized was the infrastructure projects for areas frequented by pilgrims. She said, “Dasturji wanted the ‘Flying Ranee’ to stop at Udvada station. For the train to stop there just once, we would have to stop 18 other trains between Mumbai and rest of the country. I spoke to the Minister of Railways, saying when we have additional lines coming up, can this be considered. There was also an additional request to build escalators for the elderly who come for pilgrimage. I am happy to announce that not only an escalator but also a world class infrastructure is now proposed at Udvada.”

Along with Mukhmeet Singh Bhatia, Smriti Irani highlighted various issues, stressing on promoting our unique skill-sets like gara and kusti making, and how can these could be institutionalized. She suggested a setting a system at the Mumbai University for PhDs on the community. “We are committed that wherever the community needs financial support, it can be given for such startups,” she said for promoting business.

To ensure that correct communications reach the community, Smriti Irani proposed, “We have three prominent publications today – Jame Jamshed, Parsi Times and Parsiana. Can we look at how we can do advocacy and community building through these channels of communication so that direct data, details, programs and policies reach the community at large?” She hoped, this would mark the beginning of a productive and fruitful venture.

Felicitations were done by BPP and the Anjumans present. Leading stage actor and personality of Gujarati and Parsi Theatre, Padma Shri Yazdi Karanjia entertained the audience with his witty speech, emphasizing on terms such as unity and leadership qualities along with ‘Good Thoughts, Good Words and Good Deeds’. Next, Er. Cyrus Darbari spoke on the need to bring back the Avesta language in the limelight, may be through seats available for the community at the college or university level. He spoke of the ‘Jamsetjee Jeejeebhoy Zarthosti Madersa’ which aims to impart Avesta language and study, where students can learn about our rich heritage and culture. More funds were needed for the above course to survive and also digitize the entire process. Smriti Irani assured that the GoI would finance and support the project to preserve the language through the above institution, as also its digitization, announcing a grant of Rs. 1 crore. Further, they would recognize it under their ministry as the Institute of Excellence for Avesta Language and also support it financially.

The next speaker, Dinshaw Tamboly, Chairman – The World Zoroastrian Organisation Trust Funds, represented WZO and Empowering Mobeds, highlighting several issues faced by the community including like growing poverty, especially in rural areas of South Gujarat and adjoining places in Maharashtra and population depletion. He also spoke of the unfortunate condition of most of the Priests (Mobeds) within the community, highlighting their challenges as well as suggesting effective solutions. He requested the government to set up policy to address these issues.

He shared WZO and the Surat Parsi Panchayat’s undertaking – a rehabilitation program, assisting and supporting poor Zoroastrian farmers. He stressed the need of having knowledgeable and educated class of priests within the community. “It is not only essential to encourage the young Athornans to take up Mobedy as a full-time profession but also make it economically viable,” he said. He spoke of the Empowering Mobeds project and its program. Smriti Irani expressed appreciation for all the good work done and said that the GoI would here on support projects, especially Mediclaim for the Mobeds entire family. She also pledged securing Zoroastrian farmers’ needs for seeds, fertilizers or any beneficial scientific systems.

The third speaker, Hoshaang Gotla, Founder of XYZ, shared that the main aim of XYZ was to bring back a sense of belonging and pride within the children of our community and to impart in them knowledge of our prayers and culture. He spoke of skill sets developed at XYZ like time and money management, becoming a team player and making a difference in the lives of others. He spoke about various XYZ initiatives that helped ease the lives of the less privileged, as also activities conducted during the pandemic in association with children from Australia, Karachi, Singapore and America. XYZ foundation has now moved towards XYZ Juniors, XYZ Members, XYZ Seniors with its alumni, XYZ Volunteers and finally XYZ Silver’s Age group involving senior citizens. Smriti applauded Hoshaang and his team and proposed that XYZ should go nationwide with the help of the ministry and also suggested a Parsi version of ‘Khelo India’ for the community.

Ervad Dr. Ramiyar Karanjia gave the vote of thanks. He expressed gratitude to Smriti Irani, Bhatia, Kersi Deboo and Vada Dasturji Khurshed Dastoor for organizing this great initiative, which ended with lunch.