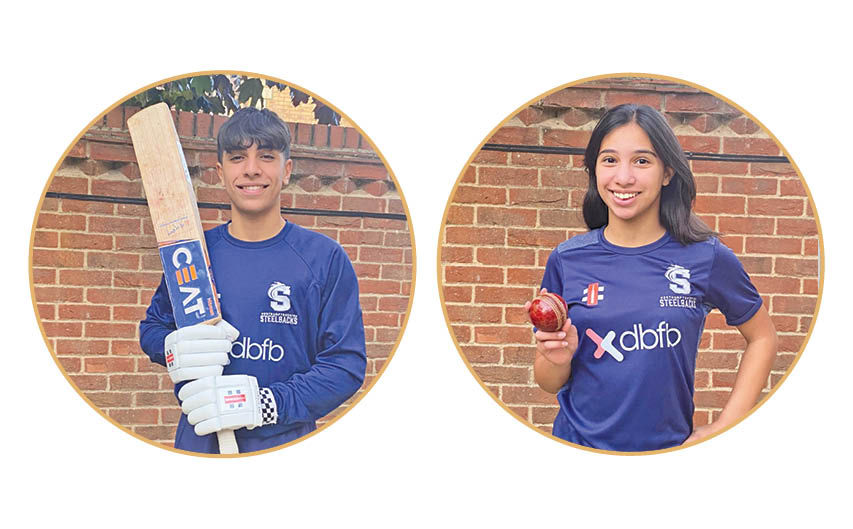 England-based brother-sister duo – 16-year-old wicketkeeper-cum-batsman Kayan and 12-year-old right arm, leg spinner Saisha Ranina – have displayed extraordinary talent in the community’s top-favourite game of Cricket and represent one of the leading cricket clubs in the United Kingdom – ‘Old Northamptonians’, and also play County Cricket for ‘Northamptonshire CCC’! Having developed their distinct styles, their cricketing skills coupled with hard work and dedication, is sure to catapult them to the next level of greatness and perhaps bring back the glorious days when Parsis comprised some of the best cricketers in the world! Parsi Times Reporter Binaisha M. Surti brings you an exclusive interview with these dynamic and dashing young guns – Kayan and Saishma Ranina.

There can be no greater joy for a sportsperson to play for and represent one’s team on various levels – local, national and international. Sibling cricketers – Kayan (16) and Saisha Ranina (12!!) are well on their way journey towards that glory, representing ‘Old Northamptonians’ – UK’s leading cricket club, while also playing County Cricket for ‘Northamptonshire CCC’.

Though Kayan displayed great prowess in multiple sports, including football, badminton and tennis, like a true-bawa, it was cricket that was closest to his heart, and which he selected to focus on. All of 9 when he started playing cricket, Kayan wanted to carve his niche in the world of cricket. “I went through the trials, played for my district and finally made my county debut for the Northamptonshire Under-11 team. There’s been no looking back since,” shares the teenager who recently clinched the ‘Player’s Player Award’ for his club, in the Under-15 category.

Saisha, Kayan’s equally talented sister, who recently won the ‘Best County Bowler Of The Year Award’ (Under-13) chose to become a right arm leg spinner champ! Influenced by Kayan and her father, also an avid sportsperson, Saisha decided to pursue cricket. They always looking out for each other, through practice or matches. “Kayan gives me valuable tips when I’m bowling because he’s experienced. He’s always around to help me. Though we’re super competitive on the field, at the end of the day we always want the best for each other.”

Such resounding success, at such a young age, is always attributable to a solid family structure. Proud parents, Hushad and Tinaz Ranina have been their biggest support system all through. Their constant presence, encouragement and motivation have seen the siblings through the ups and downs in life, which can be especially difficult to navigate at this young age. While Hushand wisely guides Kayan in technical aspects of the game, Tinaz is Saisha’s biggest cheer-leader, and the shining light in all their lives. And not to miss out the adorable ‘Milo’, their pet who they dearly love. “Milo is our good luck charm. Returning home to a wagging tail and unconditional love makes our day. He’s our stress-buster and our specialist fielder in the garden, running and chasing the ball. Just that he grabs the ball and wanders off with it, finally dropping it where he wants!” laugh the siblings.

As a wicketkeeper-batsman, Kayan said, “I prefer wicketkeeping – that’s my strength. Being a wicketkeeper also helps develop other skill sets. This year, I was captain of my team. From behind the stumps, I’d support my team, lift them up from challenging situations during games.”

Having watched innumerable cricket matches and women’s cricket in particular, Saisha excitedly expressed, “My county invited me to watch a game and I was doing the guard of honour. At the end, I got to meet few of the English women cricketers who were playing against Australia.” Playing for Northamptonshire CCC has been a magical experience for her. “Everyone at my county has been extremely kind and supportive all through. It’s great to be with my team and share our talents,” she added.

Having garnered much success early on in life, the steadfast siblings consistently put in that extra yard to have an edge over the rest. Kayan keenly follows English wicketkeeper – Ben Foakes and has learnt much just watching him play. “Ben’s positioning is the key. He’s never in a static position, always moving or bouncing about to get going… so that if there were an edge or a reaction-catch he needs to take, he’d pounce and grab it. That is something I look to emulate in my game too,” explained Kayan.

Speaking of life lessons learnt through cricket, Saisha said, “I’ve learnt to be very patient. More importantly, we learn that one learns that you cannot win all the time. There will be bad days, and you have to let them pass and focus on the good ones. You just have to keep an open mind and go it one step at a time.”

Speaking of a memorable game, Kayan revealed, “In a match where I played for the Men’s Team V/s Olde CC, we got off to a bad start, losing wickets quickly. I opened the batting and scored 71. The feeling of bringing my team home to victory was very special. That knock helped us win a crucial encounter and was one of my most memorable knocks, being the youngest in the team!” Sharing her memorable cricketing moment, Saisha said, “During a County game, I picked four wickets, giving way just 12 runs in 5 overs, in a 30 overs contest! I received an award for it and was later honoured with, ‘Bowler Of The Year (Under-13)’ title, in 2022, for my performances in County Cricket.”

Speaking about his debut for Parsee Gymkhana, when the team played ‘The 1886 Trophy 2022’ at Guilford, England, in August, Kayan expressed, “It was a magical experience playing with the whole team – it’s like one big family. It was also an honour to meet legendary cricketer, Farokh Engineer. He gave me some great tips which I will employ while playing.”

Kayan and Saisha work hard trying to balance playing cricket with their education and hobbies. No matter how tough it gets, they would continue playing the sport! Kayan shares an inspirational quote that motivates him: ‘Hard work beats talent, when talent doesn’t work hard’. Truly, it is one’s drive and passion that’s make you reach places, not just the skill that one possesses! For Saisha, the feeling of grabbing her first wicket remains ever so special, even as she and Kayan continues to dream big en route to achieving greater milestones and doing the community more proud!

We wish our Parsi rising stars of cricket – Kayan and Saisha, the very best! May they continue to rise and shine in cricket as also succeed in every endeavour of life!