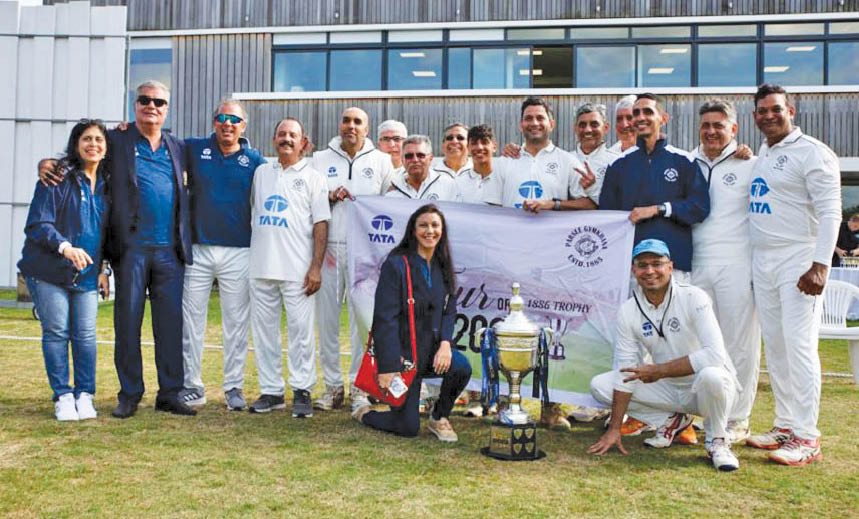 In 1886, the very first Indian cricket team that toured England comprised only Parsis, paving the path for future generations to follow. Globally, our community stands proud of engendering the nation’s cricketing heritage. Then and now, us bawas have played the game with pure passion, pride and intense energy.

Keeping the Parsi flag fluttering high, Team Parsee Gymkhana (PG) emerged victorious in the fourth edition of the historic ‘1886 Trophy’ held in August 2022 (proudly covered in detail by Parsi Times), as they celebrated the grand occasion in honour of the original team that played in the 1886 UK tour.

Farokh Engineer (Legendary Former Indian Cricketer): “It’s always a historical occasion when Parsis tour England, as they were the first ever team from India to tour England in 1886, consisting of only Parsees. It’s important to carry on this tradition. It’s indeed wonderful, year after year, to see as much enthusiasm between both teams. It’s great for an ex-cricketer like me to be present for the 1886 Trophy match. I hope this continues for a long time. I congratulate all at Guilford for organizing a great match and well done to team PG on winning another great game! Keep up the great job, Parsi Times Editor – Anahita Subedar and Journalist – Binaisha Surti for the continuous coverage on Parsee Gymkhana’s cricket over the years.”

Sir Ron Kalifa OBE (Chairman – Network International, Chair – FutureLearn, ECB Member, ZTFE Member): “Unfortunately, I could not be there on the occasion, but surely, very well done to Team PG and to the entire support staff on winning the 1886 Trophy 2022 on English soil. It’s a matter of pride for not only me but our entire community. Commemorating our heroes of the original Parsi Team and honouring their legacy, is just magnificent from PG! Also, I’m honoured to receive the Parsee Gymkhana Life Membership. A big thank you to President Mehli Golvala and all at PG!”

Lord Karan Bilimoria CBE DL (ZTFE Patron, Co-chair – Zoroastrian All Party Parliamentary Group): I am extremely touched and humbled to receive the Life Membership of Parsee Gymkhana. The Parsee tour of 1886 was a historic occasion and to commemorate and remember the original team even today is absolutely fantastic. Congratulations to Team PG on winning the prestigious and all-important 1886 trophy in 2022 at Guilford. Cricket is something close to all our hearts and it is truly wonderful to carry forward the tradition in good competitive spirit. It was also a pleasure to host the team later at the Houses of Parliament in London. Wishing Team PG the very best. May they continue to bring many more laurels to the community and country.”

Fredun De Vitre (Former Cricket Commentator, Senior High Court Adv. & Member of Team PG): The UK tour was enjoyable and memorable – the icing on the cake being the win at Guilford to retain the 1886 Trophy. The matches against all the club sides were played on the most picturesque grounds imaginable. The great team spirit and the camaraderie within the team was amazing. Each reveled in the success of the other and when star performer Kersi Pavri was forced out of the Trophy match due to injury, the others filled in splendidly… none more so than Mehernosh Chhor whose never-say-die spirit led a match-winning, last-wicket partnership with Burzin Mehta.”

Kersi Pavri (Sr. Cricketer, Member – Team PG): “It was extremely exciting to be part of the history and legacy attached to the 1886 Trophy in London this time around. Team PG showed immense character and team spirit to register an epic victory, making the trip even more exciting and memorable!”

Maneck Daruwala (Captain – Team PG): Fantastic games of cricket were played all through PG’s UK tour. During the 1886 Trophy match, PG seemed out of the game until half time of the second innings. But tremendous tenacity was shown by all to fight back and win a thrilling, nail-biting game. It was indeed the best game of all the editions so far! Kudos to my entire team for playing with great intensity and competitiveness. Most importantly, a massive thank you to all our well-wishers who sent in their best wishes and support.”

Dr. Ravi Badge (Nottingham CCC Board Member): “It’s been an absolute pleasure and honour to have hosted the great Parsee Gymkhana team at Nottingham. The passion with which everyone played stood out for me and the friendships built on this tour will last a lifetime. Knowing the history of Parsis in cricket, we wanted PG to experience Nottingham, especially Trent Bridge. It’s been a nostalgic moment. I’m sure this is only the beginning of achieving even stronger ties in the future. We look forward to welcoming PG again the next time they tour the UK! Congratulations on winning the 1886 Trophy and wishing you all lots more success!”

The 2022 UK Tour would not have been possible without the generosity of sponsors – Tata Sons, Shapoorji Pallonji and others. Also, a special mention of Parsee Gymkhana President Mehli Golvala for his unconditional support and encouragement. Indeed, a matter of great pride for the cricketing fraternity as the support and fan-following of Team PG increases by the day!