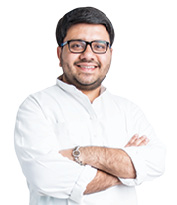 Social Worker and Crusader for a ‘Better Colaba’, Rohit Pande, has been dedicating his efforts towards the betterment of Colaba residents and is primarily responsible for the wave of the cultural and educational movement in Colaba.

In keeping with his vision of providing holistic development for all children, Rohit has introduced effective extracurricular initiatives alongside formal education via his NGO ‘Connect Colaba’, which has adopted two schools (Mrs. Ushadevi Wage High School and Colaba Municipal School) for practice. With the support of the respected school principals – ‘Magar Sir’ and ‘Dhanawade Sir’ – ‘Connect Colaba’ has been successful in conducting numerous 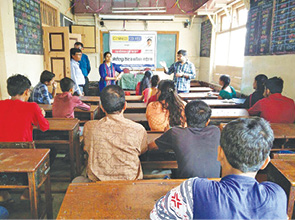 educational programs, by bringing together children from different economic strata with the aim of fostering a sense of growth and self-sustainability.

The schools do more than providing education to economically challenged students – they also foster a sense of responsibility and celebration as well as sensitise the young minds to various social issues. For inswere distributed free in schools on ex-President Dr. APJ Adbul Kalam’s birthday, nationally observed as ‘Reader’s Day’. Rohit Pande also organized a surprise visit by Marathi Filmstar Swapnil Joshi to the

schools, fulfilling the students’ dreams of meeting a star! Swapnil enjoyed a joyous chat with the students, making it a day to remember for all students!

Seeing that students of municipal schools do not receive professional educational guidance, Rohit brings in experts and conducts special guidance lectures for the SSC Board students, comprising Aptitude Tests and Career Counseling. Rohit also works towards the development of the infrastructure and school-environment.

In addition to his primary capacity as a Social Worker, Rohit Pande is also the Executive Editor of one Mumbai’s top-five Marathi Dailies, ‘Navakal’ and the General Secretary of Rayatraj Kamgar Sanghatana. His combined journalistic and social-service experiences empower him to be the perfect candidate to serve the residents of Colaba and develop a ‘Better Colaba’. Rohit Pande will contest as an independent candidate in the oncoming BMC elections (February 2017) for Corporator in Ward No. 227 (including Navy Nagar, Colaba Dandi, RC Church, all Pasta Lanes and Cusrow Baug). Rohit invites all of you to share your concerns with him and he will personally address solutions to the same. Mail Rohit at rohitpande227@gmail.com