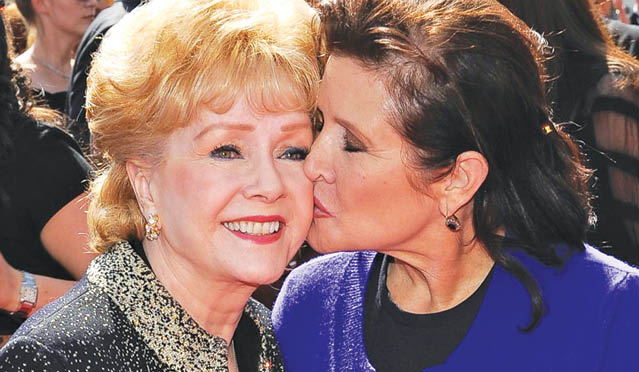 Debbie Reynolds, Hollywood’s bright eyed next door girl of 1950s is no more. She passed away on Wednesday 28 December 2016 at the age of 84. In almost a film-world tragedy, she died after her daughter Carrie Fisher, star of the epic space saga Star Wars, passed away a day before at the UCLA Medical Centre. She was sixty. Debbie had been distraught ever since Carrie suffered a medical emergency en route to LA from London on December 23. It is believed that she must have suffered a stroke. Mother and daughter will have a joint funeral.

Her pop star husband had left her to marry Elizabeth Taylor in 1958. This was the biggest scandal of its time. Debbie sang and danced her way into the hearts of millions of her fans in the iconic movie ‘Singing in the Rain’. Her movies included ‘The Unsinkable Molly Brown’ for which she was nominated for the Oscars. She won the Golden Globe for the best actress for her role as an overbearing mom in the comedy ‘Mother’. She acted in the ‘Singing Nun’, ‘Tammy and the Bachelor’, ‘Behind the Candelabra’ and many others. Debbie is survived by her son Todd and her grand-daughter Billie Lourd.

May her soul rest in peace as Debbie arrives at the great concert hall above, where even the angels will become her fans!