Parsi Times would like to caution you against an ex-marketing freelancer, named Swati Kalra, who has been spreading FALSE and MALAFIDE messages on social media platforms. Parsi Times had severed all professional ties with her, based on multiple grounds, namely Unethical Conduct, Poor Performance and Dishonesty, in August 2018.

On receiving complaints from numerous Advertisers, we terminated her association with Parsi Times, after paying her all her dues. However, on 8th and 9th of December, we received numerous messages from our advertisers and our Parsi patrons who forwarded us messages sent by her wherein she has made baseless and false claims with the malicious intent of causing harm to the image and business of our organization; defaming the Proprietor, Editor and Management.

When we confronted her, stating we would be suing her for Wrongful Defamation as her claims were based on lies and malice, she begged for forgiveness and has sent the following mail: 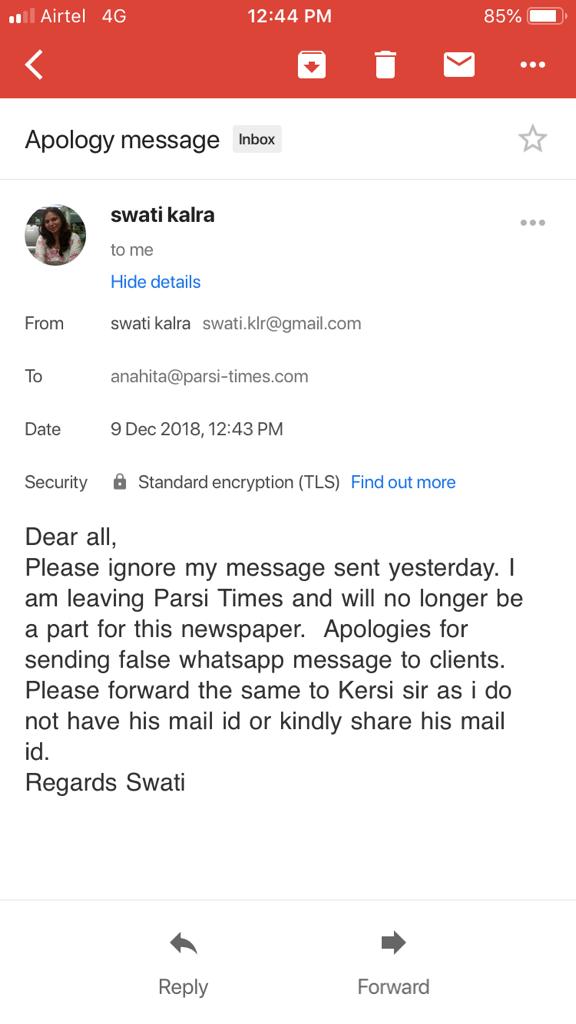 We apologize for any inconvenience caused by her petty and malicious actions, and request you to not interact with her anymore with regard to anything related to Parsi Times. Also, in order to protect you against her fraudulent nature, you are informed that Parsi Times has been receiving calls from her bank, stating she has defaulted repayment of several loans taken, and is now legally absconding.

The misinformation, spread by Swati Kalra, is regretted and as always, we assure you of our uncompromising commitment to our Community, as your leading news weekly.