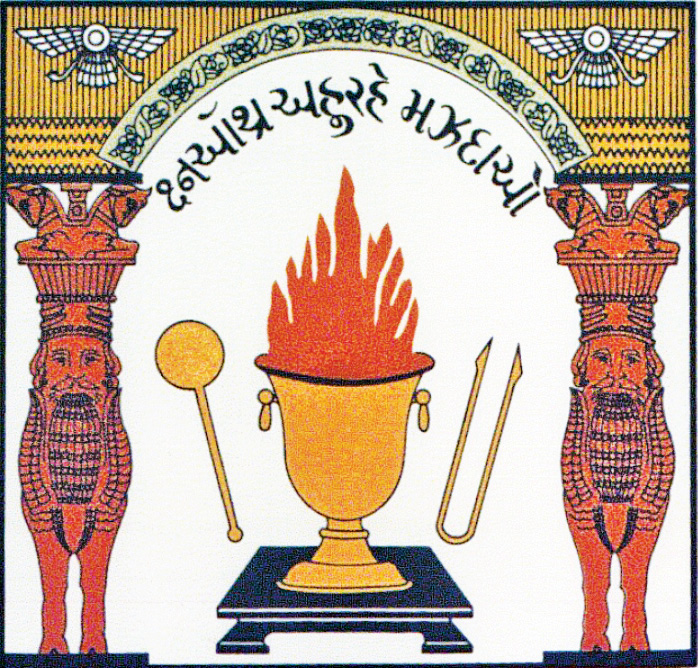 Ahura Mazda’s own angel, Sarosh Yazad, protects our mortal form and our immortal souls, from birth to divine judgement, after our passing. We venerate Sarosh Yazad as the voice of human conscience and consciousness, as He enables us to have a Good Mind (Vohu Mano). The name ‘Sarosh’ literally means obedience, taken from the Avesta root word ‘sru’, meaning ‘to hear, to obey.’ The Sarosh Baj prayer refers to Him as ‘Salar-I-Daman’, meaning ‘The Commander of The Creations in the Material World’. Sarosh Yazad is a ‘Hamkar’, a co-worker of Ardibhesht Ameshaspand.

We invoke His presence in everyday prayers (Farzyats) and, several times in our rituals and high liturgical ceremonies like Yazashne, Visparad, Vendidad and Nirangdin. He is the one who guides and protects us by interpreting our thoughts, feelings and emotions through our ‘Kharenangh’ (Khoreh – aura, glory) to help us attain the grand goal of ‘Uru’ Spiritual unfoldment.

He is the Yazata who hears from God, communicates to Man what he hears from God and asks Man to obey God’s message which he communicates. Sarosh Yazad ensures strict obedience of the entire creation to the laws of nature. He is therefore called the leader of the Creations (Saalaar-i-daamaan) in the visible as well as the invisible parts of the whole Cosmos.

Ahura Mazda entrusted Sarosh Yazad with the responsibility of protecting the material world and human beings, hence he presides over our obedience to the Divine Laws of the Mazdayasni Zarthushti religion. The powerful prayer ‘Yatha Ahu Vairyo’ is the most potent weapon of Sarosh Yazad. Sarosh Yazad is connected with the number 5, indicating our 5 senses, which we should use to live with obedience only to Ahura Mazda and observe the tenets and values of our glorious religion.

So how should we live our lives to be in synchrony with the virtues and the workings of Sarosh Yazad? A true Zoroastrian acquires divine intuition, inspiration and revelation from God through Sarosh Yazad. Sarosh Yazad guided Saoshyants, or the benefactors for humanity, like Shah Gayomard, Shah Hoshang, Shah Tehmurasp, Shah Jamshed, Shah Faredoon, Shah Minocheher, Kae Kaus, Kae Khushru and a pious person named Hom, in their ordained mission of life, to first vanquish evil and then to teach, establish and encourage humanity to worship Ahura Mazda, making the tenets, rituals and prayers of the Zarathushti religion their way of life.

Sarosh Yazad is the prime protector against all forms of evil and He protects the poor and needy as mentioned in the Sarosh Yasht Vadi-drighaoscha Driwyaoscha and in the Sarosh Yasht-Hadokht-drighum thrātotemo. The phrases ‘Darshi draosh’ and ‘Shekaft zin zin awzaar’ in the Sarosh Baj prayer relate to the powerful weapon of Ahunavar prayer possessed by Sarosh Yazad. He is referred to as tanu-manthra (incarnation of words of prayers Manthra). Therefore, he is invoked by reciting the Sarōsh Baj immediately after the Kusti ritual and Jasa Me Avanghe Mazda. He holds a central position in our Zoroastrian religion. Since Sarosh Yazad also looks after our soul, we need his guidance and protection for our soul all the time. The rooster represents Sarosh Yazad as it wakes up people early to pray in order to lead a righteous life.

Sarosh Yazad is entrusted with the responsibility of protecting us. It is through Him that prophets and even righteous men are inspired by God. He protects the souls of men both during the day and during the night. He is the most powerful Yazad against evil, especially at night (Paschahu frashmodaitim from Sarosh Yasht – Vadi). His protection can be asked for and wished for at night by either praying the short Nirang of the Sarosh Yasht Vadi thrice or by saying the words ‘Sarosh Yazad Panāhbād’, meaning, “May Sarosh Yazad protect you,” before going to bed. Hence, the Nirang of the Sarosh Yasht Vadi describes him as ‘Pasban’, the protector. The words ‘Ahunem Vairim Tanum Paiti’ describe the Ahunavar prayer as his weapon, with which he protects our human body during our lifetime and our souls, after death.

Sarosh Yazad is the protector of the souls of the living as well as the dead. He acts as the protector and guide of the holy from birth to ‘transition’. For this reason religious ceremonies such as ‘Sarosh-nu Patroo’, Baj, Yazashne, Vendidad, etc. are specially performed during the first three days after death during which the souls remain under His protection from the very day of birth down to death, and even thereafter (Sarosh Yast Vadi Nirang).