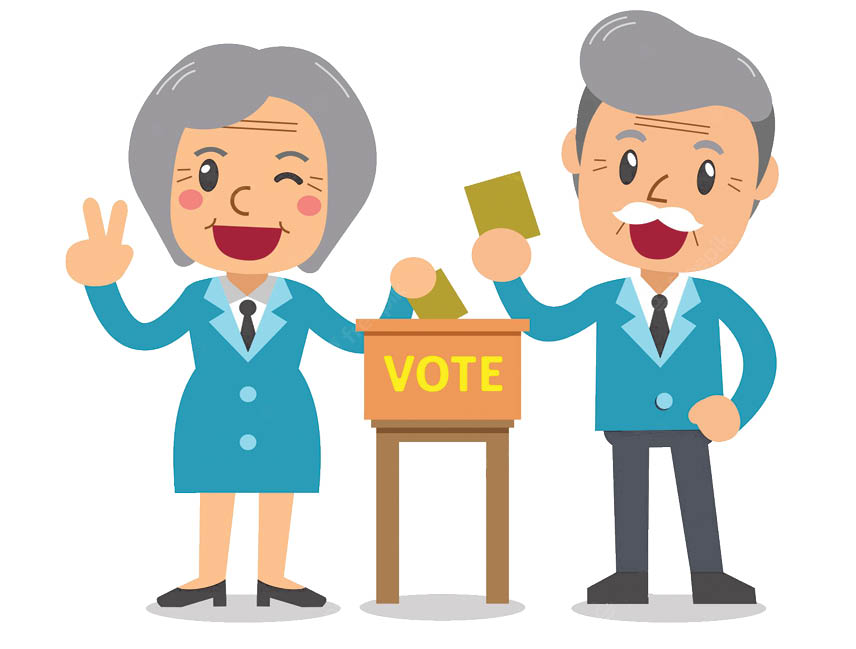 Meherbai’s Mandli met at Keki’s house to celebrate his 67th Birthday. Of course, being kunjoos-makkhichoos, Keki had asked everyone to bring their own snacks, while Meherbai would provide the cake and Meherwanji, the beer.

The conversation at Meherbai’s Mandli was always topical – like the ice-cream flavour of the month, the on-going heat-wave and so, today, they discussed the impending BPP elections! Mandli-member Vikaji Vaghmaru had also decided to stand for Trusteeship this time and this brought about mixed reaction in the Mandli…

Meherwanji: We must all support you, Vika. What is your candidature number?

Banu Batak: Only a married man can make a suitable Trustee since he would be well-trained by his wife. Also, being married, he has seen lots of hardship and is used to receiving daily complaints.

Vikaji: Don’t rub salt in my wounds. You know how much I’ve been wanting to get married! You married people are so happy!!

Khurshedji Khit-pit entered just then, shouting: “Vote for Vikaji, Vote for Vikaji”. Why should he be so jolly-jingo while all of us are married and under the wife’s thumb?

Dorabji Dolo: Yes! Yes! We are all married while Vikaji is happy. Not fair. Vote for Vikaji!

Meherbai: Vikaji, what will you bring to the BPP table?

Meherbai:  Marerey! Aai soo trustee thavano? What I mean is, what will you do for the community?

Bomi Bevdo: The only change you seem to have are the few coins in your pocket. What real change can you bring?

Vikaji: I’ll persuade all the young Duttas and Duttis of our community to marry early and have at least three kids. In return, all the young couples will have a huge flat in a Parsi Colony, entirely free of charge. Also, honeymoon in Switzerland and free foreign education for their children. That way, we won’t become extinct like the dinosaurs! Also, payment of all medical bills and vacations.

Vikaji: I’ll also open a special grievance-cell for hen-pecked Parsi husbands and a ‘Society for Prevention of Cruelty to Parsi Husbands’ like that animal welfare society!

Cyrus, the Virus: Bad idea, Vikaji. You don’t stand a chance. Better make an honourable retreat. You are a nice person but not ‘Trustee-Material’. You are anonymous, invisible – no one has heard of you in the community and now you suddenly pop-up like a Jack-in-the-Box!! Havey dhakhara java deo!

Vikaji: Don’t try to demoralise me!! Where there’s a ‘will’, there’s a way!

Abbhan Aban: Where there’s a will, there are beneficiaries! Everyone wants to be in it.

Jabri Jaloo: Our Vikaji is not invisible like Anil Kapoor in Mr. India. Our entire Mandli knows him and will vote for him. Vikaji, the next-door flat in my Parsi Colony is vacant, please reserve it for my married daughter.

Meherbai: What’s this nonsense, Jaloo! Asking for favours? Besides, your daughter already has one colony flat!!

Meherwanji: Stop all this flat-talk please! The beers I have opened are going flat!! Let’s take salamati and wish best of luck to our Vikaji – May the best man win!!

Vikaji: No! No! I want to win. Even if I’m second best or third best! If a Chai-wala can rise so high in our country, why can’t I become a BPP Trustee?

Meherbai: Vikaji, why this sudden enthusiasm to become a Trustee?

Vikaji: Arrey mai, tamuney su kahoo? For the last 15 years, I’m doing faa-faa (struggling) to get married but I always get rejected. So, after deep thought, Coomi Kaajwali suggested that I become a BPP Trustee, an influential man, so that girls come to me in droves, like bees to a flower, and I can pick and choose who I want to marry and settle down with!!

Meherbai: I have never heard of such a unique agenda for Trusteeship!!

Meherwanji: And you NEVER will!!