In March 2021, historian and author, Marzban Jamshedji Giara launched his latest book titled, ‘Prominent Parsis of Navsari’ for the benefit of the community’s understanding of some of the most prominent members of our community hailing from Navsari.  As per the author, the contribution of Parsis to the growth of Navsari has not been well […]

US-based best-selling author and award-winning novelist, Thrity Umrigar, who is known for writing books that depict Indian, Indo-Americans and American characters with poignancy and nuance, will release her latest venture – a brilliant picture-book titled ‘Sugar In Milk’, illustrating the value of refugees. The story, popularly known in India as ‘Doodh Ma Saakar’ and is […]

6th October, 2019, saw Mumbai’s popular boutique bookshop – KitabKhana (Fort) – brimming with as many children as adults to celebrate the 8th Poetry Festival for children and the 3rd book launch under the ‘100 Thousand Poets for Change’ flagship. Brilliantly coordinated by poet and literati, Menka Shivdasani, and conducted by former Principal, Queen Mary […] 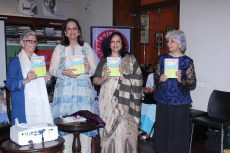 Singapore based former pilot, 79-year-old Rustom J. Kanga, paid a romantic, touching and enriching tribute to his late wife, Suna, who succumbed to illness in 2015, by completing her final project – a book she had been working on since 2014, which throws light on the Parsi community in Singapore. Immortalising his wife’s legacy titled, […]

Dr. Coomi S. Vevaina is an author who just does not pen pretty words to read, she adds her own magical touch to her crisp writing, which brings life to her books. Parsi Times Reporter Binaisha M. Surti highlights all that happened at this author’s book launch. Dr. Coomi S. Vevaina has written an intriguing and useful […]