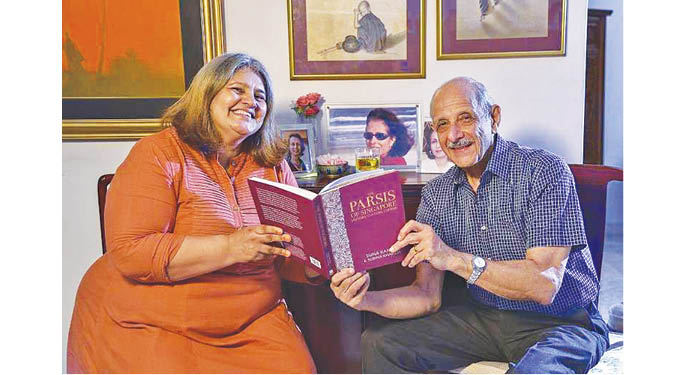 Singapore based former pilot, 79-year-old Rustom J. Kanga, paid a romantic, touching and enriching tribute to his late wife, Suna, who succumbed to illness in 2015, by completing her final project – a book she had been working on since 2014, which throws light on the Parsi community in Singapore. Immortalising his wife’s legacy titled, ‘The Parsis Of Singapore: History, Culture, Cuisine’, Rustom formally launched the book this week at The Mica Building. It was attended by around 300 people, including 80 Parsis. The publisher, Epigram Books, claims that this book is the first of its kind, elucidating the social history of the local Parsi community in Singapore.

Kanga was assisted by his children, Cyrus and Nazneen, to finish this labour of love started by Suna – a book on the history, culture and customs of the little-known Parsi community of Singapore meant as a tribute to their adopted country. Kanga and his late wife’s co-author, Subina Khaneja, worked daily for long hours to complete this 256-paged book which features chapters dedicated to the history of the Parsis in Singapore since the 19th century, Zoroastrian customs, unique aspects of Parsi culture and over 40 Parsi recipes.

In a moving speech, Kanga said, “Suna, this is your labour of love, and we are all proud and thankful for the voice you have given to the Parsis of Singapore.” 700 copies of the book have been printed. Priced at $55.90, it is available at Epigram Books’ online store and all major bookstores.

Although our community’s miniscule size in Singapore – all of 350 Parsis – even here the Parsis have managed to make notable contributions to Singaporean society. Parsi celebrities in Singapore include ‘Under One Roof’ star, Daisy Irani and Dr. Jimmy Daruwalla, Founder of the Dyslexia Association of Singapore.