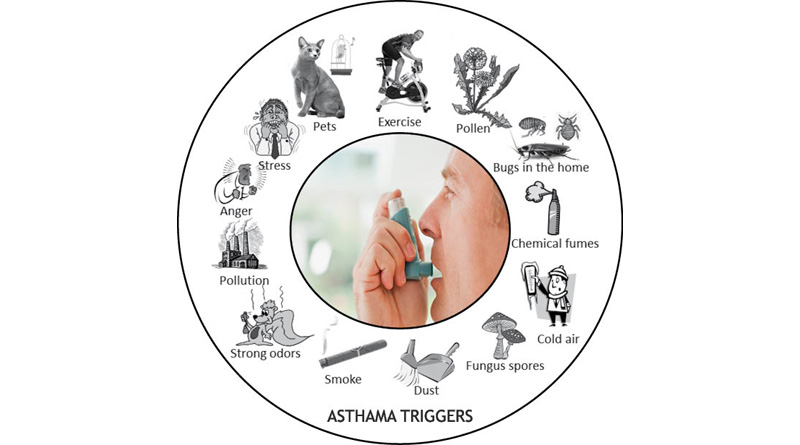 There are over 30 crore asthmatics in the world – over 2.5 lakh people die of asthma yearly. Don’t let the wheeze of asthma strangle your zest for life.

Asthma is a chronic disorder in which the airways or bronchial tubes that allow air to come in and out of the lungs, get inflamed. This creates difficulty in breathing. The muscles around the airways tighten when something triggers your symptoms. This makes it more difficult for air to move in and out of the lungs, causing symptoms such as coughing, wheezing, shortness of breath and/or chest tightness.

Essentially, asthma is a psychosomatic disorder, triggered as much by allergens as by dysfunctional relationships and stress. People who suffer from severe allergy to odour, smoke, pollutants, pollen, mould and House Dust Mite [HDM] are most susceptible to asthma. It’s important to understand that asthma should not be considered a single disease as it does not have a uniform pattern of presentation.

The causes of asthma include allergy to certain substances or allergens including certain foods (esp. eggs, prawns and shell fish); pollutants, physical exertion, viral infection, cold air, tobacco smoke, animal feathers and dander, and sometimes even certain conventional medicines, like ‘Aspirin’. Other factors include chemicals and toxins or temperature changes and humidity.

The disorder could also be activated by irritation or infection of the respiratory tract or a gastrointestinal upset which is typically a result of late or irregular meals, hyperacidity, faulty eating habits, dietetic indiscretion or junk food. Certain emotional factors such as anxiety and emotional worries may trigger sudden bouts of asthma. Clinicians suggest that a constitutional predisposition could also trigger the disorder. This is supposedly related to desperate feelings of dependence. A child’s asthmatic attacks, for example, could be a call for help, or a subconscious appeal to his/her mother for attention.

Research confirms the occurrence of wheezing in certain individuals following a short period of exercise. It is also obvious that respiratory viruses can provoke ‘bronchospasm’ (airway obstruction) in asthmatics. Age, likewise, is a significant influencing aspect — the first asthma attack reportedly develops before age 20. Some medical researchers also aver that asthma is not entirely hereditary, it is primarily swayed by weather and locational changes.

Homeopathy treats the patient of asthma according to the specifics of his/her condition in addition to the symptoms presented. There was an interesting case of a sensitive child who was treated successfully. The child’s asthma attacks coincided with his father’s foreign trips and absence from home, hence triggered by feelings of separation anxiety. A few doses of Magnesia Carbonica 200C, which corresponds to such a symptom, were enough to make him feel alright and free from asthmatic episodes. The efficacy of homeopathy for asthma has similarly been proven through clinical research.

Some Tips For Asthma Management: