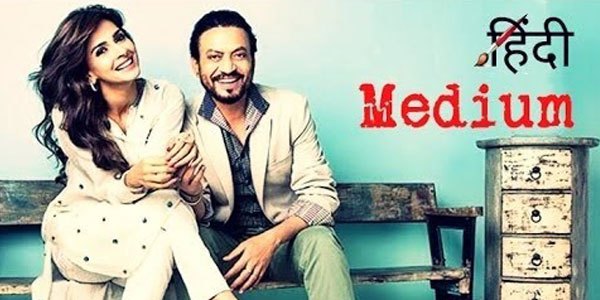 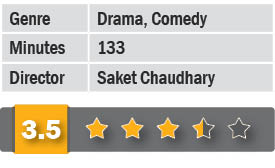 Loosely inspired by the Bengali Ramdhanu and the Malayalam Salt Mango Tree, Hindi Medium mirrors the agony and woes parents endure while securing admission for their kids in schools. Chaudhary, in his third feature after Pyaar (and Shaadi) Ke Side Effects, has crafted a delightful and light-hearted comedy which expounds on the trials and tribulations of the parents – come admission time.

Raj Batra (Irrfan Khan) has a thriving garment shop in Chandni Chowk selling ‘original first copies’ of celebrated designers, including Manish Malhotra. While his spoken English belongs to Chandni Chowk, his wife Mita’s (Pakistani actor Saba Qamar) is a couple of notches superior. Mita aspires to get their four-year-old daughter Pia (Dishita Sehgal) admitted to one of the top five English medium schools in Delhi. When she is rejected by four of them, they move to a posh neighbourhood (throwing a champagne and caviar housewarming party) as the school will only admit their ward if their residence is within three kilometres. When even that fails, they resort to the government’s RTE (Right to Education) quota, whereby 25% of the seats are reserved for the economically backward.

Director Chaudhary gets his scenarios right – whether it is the few scenes of Raj and Mita with the education consultant (Tilottama Shome in a superbly cast and enacted role) who brags that parents ‘book’ her when the mother is in her first trimester; or the subplot where the family having moved to the water-starved and rat-infested slums, comes in contact with their well-meaning daily-wage-earning neighbour Shyam Prakash (Deepak Dobriyal).

HM is a satire alright: a satire on the education system without going into the nitty-gritties. At times you get the distinct feeling – and you are not wrong in presuming it – that it’s a vehicle to showcase the powerhouse talent that is Irrfan Khan: your gaze is riveted on him whenever he’s on screen, no matter who’s got the lines – and Irrfan certainly has the best of them. Saba Qamar as the wife lends admirable support, while Neha Dhupia and Sanjay Suri are wasted in their too-brief roles. We are given a hint (nothing more), of Saba Qamar and Sanjay Suri being ex-college mates. Dobriyal shines in his role with one of his best performances till date, while Amrita Singh as the seemingly upright but corrupt principal does well.

The editing and cinematography is commendable, as are the dialogues by Amitosh Nagpal. Two of the songs have been rehashed and are unnecessary, while Ek Jindari towards the end is the only apt soundtrack. Cinematic liberties abound in the second half of the film. Hindi Medium can best be described as a breezy sitcom, perfect for a family outing.