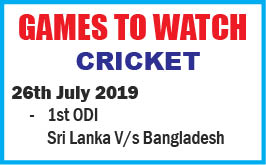 Hosts England and New Zealand were involved in one of the best encounters ever in the history of the World Cup as the final ended in a tie, as did the Super-over! Eventually, England were declared champions for the first ever time based on a higher boundary count, having scored six boundaries more than the Kiwis. This would also be the first time in twenty-seven years that England made it to the World Cup finals. Batting first, New Zealand scored 241-8 in 50 overs. Henry Nicholls top scored with 55 while wicket keeper Tom Latham contributed 47. For the Englishmen, Chris Woakes snapped up (3-37) in 9 overs, Liam Plunkett picked (3-42) in 10 overs; Jofra Archer and Mark Wood grabbed 1 wicket each. In reply, England finished with 241 in 50 overs. Man of the Match, Ben Stokes played the innings of his life, scoring an unbeaten 84 while Jos Buttler contributed 58.

The finals was a roller coaster ride down to the very last ball! The ball deflecting off Stoke’s bat during the last over, which was eventually awarded six runs by the umpires, plus a run out of the last delivery… all added to the pressure. During the super-over, England posted 15 runs off their six deliveries. New Zealand needed 16 to win. Bowler Jofra Archer bowled a wide off the first ball. On the next delivery, two runs were taken. The second ball was smashed for a six, the third went for two, and on the fourth yet again two runs were taken. On the fifth delivery, Neesham picked a single. Needing two off the last ball, the Kiwis managed only one. Wicket keeper Buttler collected the ball and whipped off the bails as Guptill fell short by 1. With the super over ending in a tie, Eoin Morgan and England created history, while a heart broken New Zealand were declared runners up!

Novak Djokovic produced a performance that people will remember for ages, as he defeated eight-time winner, Roger Federer 7-6(5), 1-6, 7-6(4), 4-6, 13-12(3), to clinch his 5th crown and 16th overall Grand Slam title. The massive battle of nerves lasted for a record-breaking four hours and fifty-five minutes between star tennis players Djokovic and Federer.

PV Sindhu In Quarter-Finals; Srikanth Out of Indonesia Open

At the Indonesia Open, ace Indian shuttler, PV Sindhu, performed brilliantly, advancing to the Qquarter-Finals of the ongoing Indonesia Open 2019, defeating Denmark’s Mia Blichfeldt 21-14, 17-21, 21-11 in a match that lasted for 62 minutes. Kidambi Srikanth was knocked out during the second round, losing 17-21, 19-21 to Angus Ng Ka Long.