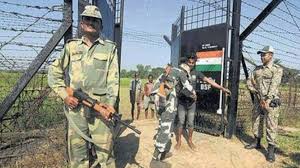 The turmoil at our borders continues. The media is replete with news of incursions and intrusions, with neither side showing any urgency in de-escalation. I believe the genesis of the problem lies in the origins of this border. Who drew the border and how was it drawn? Way back in 1912, on orders from His Imperial Majesty, Mr. McMahon was directed to do the needful. He opened the chart, picked up a pencil and drew a line, the famous ‘McMahon Line’, right across the Himalayan Range. Little realising that just the thickness of this ‘line’, made by his pencil, more than a century ago, would translate into a few hundred, if not thousand, meters on the ground, extending from one peak to another. Ironically, this line still stands valid.

This is most unlike us Indians, who are intrinsically possessive of their properties and will go to any extent to ensure validity, including getting at each other’s throat. For nearly three quarters of a century, we’ve been unable to define the borders of our Nation, not even temporarily. It is a sad commentary that in all negotiations and deliberations we have been involved with on this count, we neglected to prefix the basic word ‘Existing’ to the Line of Control or the Line of Actual Control. It is just an ‘ambiguous’ LOC/LAC, and hence, no wonder, the neighbours take advantage of this. I hope we are also doing the same.

Referring to the continued standoff at the LAC/LOC, our Foreign Minister recently stated, “the state of the border and the future of our ties cannot be separated.” How true! I was reminded of the event when this philosophy was enacted three scores and ten years earlier in a small town in South India. After Dad passed away in 1949, we continued to stay in the Agiary (Fire Temple) premises where he was the Panthaky (Head Priest). Obviously, this was not in perpetuity and a year later, Mom was asked to move out with her brood of five.

A frantic search for alternate accommodation ensued and finally she located this dilapidated but adorable bungalow – BC 117, spread over three-fourths of an acre, in the Cantonment area. It belonged to Mr. Queen, an Anglo-Indian living by himself, who had finally decided to join his family in the UK. The property stood at the corner of Havelock Road and Cattle Road with the Pereira’s Bungalow on one side and the Magee’s on the other. Since old man Queen stayed alone, he had not paid much attention to his premises and, as it stood at an important corner of a tri-junction; it had become a thoroughfare for pedestrian and bicycle traffic. Needless to say, Mom would not have any of this trespassing, so she decided to fence the whole area, after getting the property officially surveyed by the local authority.

During the course of the survey, it was revealed that a large portion of our property had been inadvertently claimed by the neighbours! Not with any mala fide intentions but through general practice and the owners neglect. This included a deep water well, which by practice had become the property of the neighbours whereas, in actual fact, half of it fell within our property. This misunderstanding, presumably was owing to the absence of any fencing and continued usage by others without any objections from the earlier landlord.

This obviously ruffled many feathers. The respective LOH from the neighbouring houses could be heard gossiping across the fence, “Who does she think she is, stopping us from going across?” “She thinks she is the Queen”. And sadly, with the kids, it was ‘kittee’, total boycott, at home and at school. All this notwithstanding, the barbed wire fence went up and the short cut through the compound and the trespassing came to an end, much to the chagrin of the neighbours. It is believed that when the British King dies an announcement is made, ‘The King is dead, long live the King’. In this case it was ‘Queen has gone, long live the Queen’!

But truly, time is a great healer. Earlier than expected, all was back to normal, first with the kids at school and soon thereafter with the families. Only difference being, instead of walking across to the neighbours, we had to jump over the common well. And, as my old buddy Hubert from Toronto, once from across the fence, said, “in all probability the two Granddames may be sipping from a snifter of cognac, as we recount this episode!”

It is thus that ‘the state of our border’ was ensured and so was the ‘future of our ties’!

If only our leaders had followed Mom’s recipe!