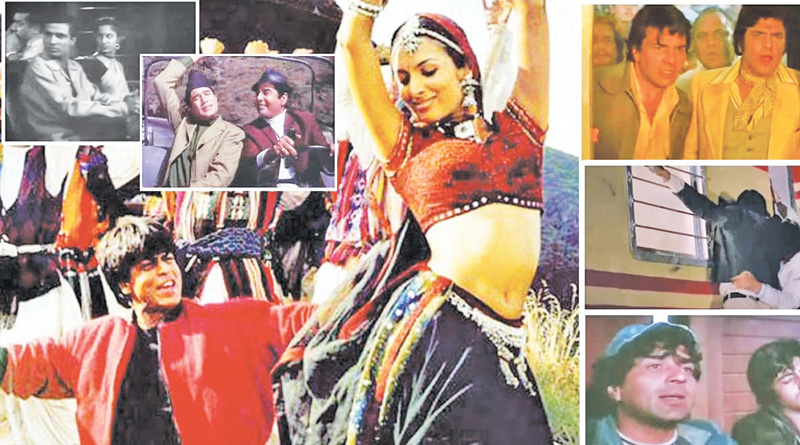 2015 marked 160 years since Western Railway (erstwhile Bombay, Baroda and Central India Railway) as we know it, was inaugurated; 145 years since Churchgate station originated; and 18th December marked 85 years since Bombay Central was established as a station! In an interesting and amusing review, Hoshang Katrak ‘tracks’ a few train-based songs in Hindi films, that most of us still hum along as we go about the journey of life… and in the process informs us of four Parsi instrumentalists who played a role in some of India’s best known songs…

A multitude of songs in Hindi films can be broadly classified as songs of rain, pain and train. While those of baarish and saawan epitomize romance, those of dard and judaai denote suffering and melancholy. All of these are fairly well-documented and form the bulk, whereas those relating to the train are the not-so-often heard or discussed.
Film Titles
Firstly, let’s take a look at film titles pertaining to the train. If the silent era had a few films such as Punjab Mail, an action film made in 1929, Daily Mail 1930 and Toofan Mail 1932; the talkies had more than their share, some with exotic names – Toofan Mail 1934, Delhi Express 1935 and also in 1949, Deccan Queen 1936 and in 1962, Imperial Mail 1939, Flying Rani 1939, Flying Express 1949 and Return of Toofan Mail 1942.
Of course, most of us are familiar with straight – forward titles such as The Train, 1970 and The Burning Train, 1980.

Songs
The first train song in Hindi cinema that made a huge impact was ‘Toofan Mail, yeh duniya….Toofan Mail’, Jawab 1942, excellently rendered by Kanan Devi, an influential and popular singer of those times, and tuned by Kamal Dasgupta.
This, though, was not the first song relating to the ‘railgaadi’. Before that, there were at least two songs, both little known and now scarcely heard: ‘Railgaadi nahin hai kisi ka ghar bhaiyya’ Keemti Aansoo 1935 and ‘Railgaadi chhuk chhuk karti dhuaan udaati hai’ from Chashmawaali 1939.
Every decade has had a few immortal songs on the subject. The fifties had the ethereal ‘Hai apna dil toh awaara’ with Dev Anand playing a journalist, serenading Waheeda Rehman in Solvaa Saal 1958. Sung by Hemant Kumar, it had the then 19-year-old Pancham (R.D. Burman) playing the harmonica to the lilting notes of papa Sachin Dev Burman.
Dev Anand was at it once more with Waheeda Rehman in ‘Apni toh har aah’ Kaala Bazar, 1960–S.D. Burman again. The chaperoning parents are confused as to whom Dev Anand is referring–the ‘uperwaali’ Waheeda occupying the upper berth or the Uparwala (Almighty).
A year later, Dev’s fascination for the common man’s mode of travel was still on track (pun intended) as he attempted to impress Asha Parekh, crooning the title song of Jab Pyar Kisi Se Hota Hai composed by the most well-known duo in music history, Shankar-Jaikishen. Both these songs were play backed by Mohammed Rafi, in an era before S.D. Burman and Dev Anand jettisoned Rafi and turned to Kishore Kumar as the essential voice of Dev Anand. But then, that is another story.
The first superstar of Indian cinema, thespian Ashok Kumar famously rapped in Aashirwaad (1968) – ‘Railgaadi……railgaadi…. chhuk chhuk’, composer Vasant Desai valiantly keeping pace with Gulzar’s lyrics.
Jump cut to 1969. A new superstar is born. And his route to the nation’s teenagers and female hearts? You guessed it right – serenading and wooing the demure, dimpled Shamila Tagore sitting in a train and ostensibly immersed in Alistair Maclean’s When Eight Bells Toll – all the while being unabashedly impressed by Sujit Kumar egging on Rajesh Khanna (not yet christened superstar) while the latter crooned ‘Mere sapnon ki rani’, making the object of his attention crystal clear. Rajesh Khanna’s jeep conveniently keeps pace with the winding tracks of Sharmila’s toy train. It is this train-backed song in Aradhana, rather than the erotic ‘Roop tera mastana’ which follows an hour later that captured the nation’s imagination and catapulted one more RK to dizzy heights. (Kishore Kumar, veteran S.D. Burman and his son Pancham had a significant role to play in escalating Rajesh Khanna to superstardom). A little-known fact- four Parsi instrumentalists had a huge role in elevating this song to the cult status it achieved – Kersi Lord on the accordion, brother Burjor on the drums, their father late Cawas Lord along with late Homi Mullan on the percussions. The seductive opening notes on the accordion in ‘Roop Tera Mastana’ was also the handiwork of Kersi Lord.
The very next year, one heard Rahul Dev Burman’s forceful and distinctive voice, as we know it, for the first time in The Train (Meri jaan maine kaha). Singing under his own baton, the junior Burman makes his throaty presence felt during the opening credits of the Rajesh Khanna starrer murder mystery.
Rajesh Khanna again it was in a duet in 1974 – this time with the comely Zeenat Aman in Ajnabi – ‘Hum donon do premi’ (Kishore / R.D. combo with Lata). 1974 also saw Kishore Kumar crooning the iconic ‘Gaadi bula rahi hai’ in Dost. Tuned by Laxmikant – Pyarelal, this film saw the potent combination of Dharmendra and Shatrughan Sinha.
The very next year, 1975, saw Rishi Kapoor and Paintal cross-dressing and singing ‘Chhuk chhuk…. Bombay se Baroda tak’ in Rafoo Chakkar to the vocals of siblings Asha Bhosle and Usha Mangeshkar, along with part-timer Mahesh Kumar. This film was a straight lift from Billy Wilder’s Some Like it Hot starring Jack Lemmon, Tony Curtis and Marilyn Monroe.
Besides these, there have been several train-related songs picturised on alms-seekers in up-country trains.
Other prominent songs, down the years, include (in no particular order)…
(1) ‘Chal chhaiyya chhaiyya’ from Dil Se
(2) ‘Cheel cheel chillaake kajri sunaaye’ from Half Ticket, 1962 – a typical fun song by the eccentric Kishore Kumar.
(3) ‘Auraton ke dabbe mein mard aa gaya’ from Mud Mud Ke Na Dekh, 1960 – Bharat Bhushan is ejected from a ladies’ compartment.
(4) ‘Chalte chalte’ from Pakeezah 1971 – Lata Mangeshkar. The whistling of the train is conspicuously heard in this song.
(5) The Dilip Kumar – Shammi Kapoor starrer Vidhaata 1982 too had ‘Yeh khel hai taqdeeron ka’.
(6) ‘Rukh se zara naqaab hata do’ – Mere Huzoor 1968 – Rafi / S.J.
(7) ‘Gaadi dilli waali chali’ – Delhi Junction, 1960. Lata & chorus with music by Kalyanji Virji Shah.
(8) In Aamir Khan’s Hum Hain Raahi Pyar Ke (1993), the Nadeem-Shravan tuned ‘Dilli se gayi Poona’ was a rage in its time.

A little-known fact- four Parsi instrumentalists had a huge role in elevating this song to the cult status it achieved – Kersi Lord on the accordion, brother Burjor on the drums, their father late Cawas Lord along with late Homi Mullan on the percussions. The seductive opening notes on the accordion in ‘Roop Tera Mastana’ was also the handiwork of Kersi Lord.