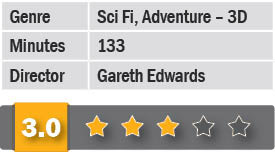 The galaxies are at war again. Rebel Intelligence Officer Cassian Andor (Diego Lune) is in charge of a mini-army which consists of Rebellion Alliance soldier Jyn Erso (Felicity Jones), a blind gladiator (Donnie Yen), a freelance assassin (Jiang Wen) and an ex-pilot (Riaz Ahmed), a defector from the Imperial group. Their sole mission is to steal the blueprint of ‘Death Star’ – the Empire’s new super-weapon from the evil Empire Commander Orson Krennic (Ben Mendelsohm) of the Imperial Military.

As in all sci-fi movies a sense of vengeance and good-vs-bad permeates Jyn’s cause: her mother was killed by Krennic’s forces, while her father Galen (Mads Mikkelsen), the designing engineer of what would eventually become the Death Star, was taken captive. She was then brought up by Saw Gerrera (Foresh Whitaker), a veteran from the Clone Wars. And then, of course, you have Darth Vader making a cameo appearance (voiced by the inimitable James Earl Jones).

With a view to reaching out to international audiences, ‘Rogue One’, the first of the Star Wars Anthology series (not based on the Skywalker family) set just before the events of the original Star Wars (1977) has, as its main cast, actors from diverse nationalities. Felicity Jones is British, Wen is Chinese, Ahmed is British of Pakistani origin, while Milleksen is Danish and Yen is a martial arts expert from Hong Kong. Director Edwards, with a background in special effects, has done a reasonably good job of interpreting the gist and substance of Star Wars (“a long time ago in a galaxy far, far away…..”) while eschewing the subplots of the earlier films.

The cinematography by Greig Fraser and music by Michael Giacchino (Zeotropolis, Jurassic World) is admirable. It’s the first time John Williams has not composed for “Star War” films. With new characters and locations brought in, this latest episode seems to be a courageous and calculated effort to move away from the basic premise of the earlier Star Wars films. While the primary postulation of a sci-fi film indulging in inter-galactic warfare remains largely the same, the 3-D IMAX effects of this film would be worth watching.
“May the Force be with you” (no, not the John Abraham one)!