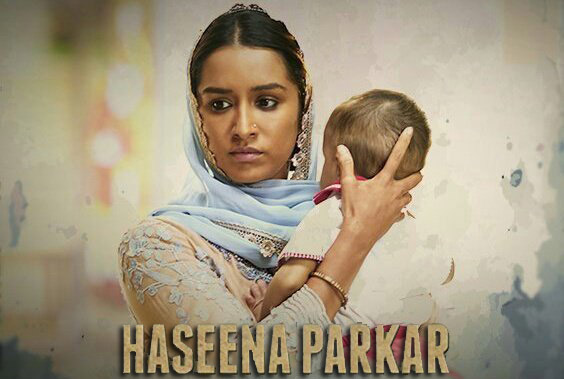 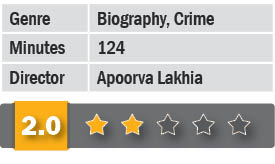 tongue-in-prosthetics) remark to the court that the presiding magistrate has no jurisdiction over the matter at hand.
For the uninitiated, Haseena Parkar was (having passed away in July 2014) the younger sister of India’s most wanted, Dawood Ibrahim. After the Mumbai (Bombay, then) police had made life difficult for the Don and he had to make a hurried getaway to Dubai, sibbling Haseena gradually took over the mantle —settling disputes, allegedly having a share in real estate dealings, extortion, etc.
Director Apoorva Lakhia, whose filmography boasts of the gangster film ‘Shootout at Lokhandwala’among others, has attempted the biography of one among the family of 12 children of former Mumbai constable Ibrahim Kaskar, who lived in the Nagpada area.
In-between the flashbacks of the 70s, when Dawood and his brother Sabir made their presence felt in the city’s underworld taking on the Pathan gang and instilling terror in the public besides handing the police personnel their overtime paycheques, comes the forlorn figure of Haseena in a burkha standing in the witness box taking her own sweet time in replying  (all in the negative) to the prosecutor’s questions on her brother’s involvement  in smuggling, the 1992 J J Hospital shootout, the 1993 Mumbai serial blasts, all of which warrant fleeting flashbacks.
If there’s anything to be learnt from the film, it is that Haseena married a restaurant owner and a small-time Hindi film stunt artiste – Ibrahim Parkar (Ankur Bhatia in a watchable role), who was gunned down by the Gawli gang in 1991.
The terribly miscast Shraddha Kapoor does her best to fit the character of Haseena Parkar, but even with the tanned and deglamourised look (the result of some heavy makeup) it barely says much of her acting skills. Real-life brother Siddhanth Kapoor as reel brother Dawood is probably a couple of shades more impressive than Farhan Akhtar’s recent reprisal of the Don in ‘Daddy’.
But it is clearly the script that bogs down the film. Characters are barely fleshed out, though the body count grows with every passing episode of the brothers’ escapades, marking it as one of those non-menacing gangster films.
While the cinematography and background music is average, the only saving grace is Priyanka Sethia’s portrayal of public prosecutor Rohini Salian (changed in the film to Roshni Satham) who had handled the J J shootout case, while Rajesh Tailang as defence lawyer as Shyam Keswani is passable.