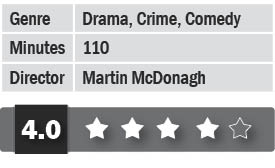 When was the last time one saw a film where tears of sorrow turned to sporadic laughter and the other way around? The third film of playwright-turned-director Martin McDonagh (screenplay too), ‘Three Billboards…’ narrates the story of Mildred Hayes (Frances McDormand), a grief-stricken mother whose daughter was raped and burnt to death and is seeking justice in an atypical way, after waiting seven long months. Presuming, correctly, that her daughter’s files are gathering dust in the local police station, she vents her frustration by putting up three billboards on a dusty, barely used road leading to town, ‘Raped While Dying’, ‘And Still No Arrests?’ and ‘How Come Chief Willoughby?’ – the last one referring to upright Police Chief  (Woody Harrelson), who’s suffering from cancer and admits to Hayes to being helpless.
Director McDonagh has structured a fine narrative, eschewing subplots in favour of delving on characterization. While Hayes is shown as resolute and unforgiving, Willoughby’s deputy, Jason Dixon (Sam Rockwell in a brilliant performance) is racist and a self-corrosive alcoholic, besides being a mama’s boy. The supporting cast,  too, chip in admirably – Peter Dinklage as James, who comes to Hayes’ rescue, or Caleb Landry Jones as Red Welby, the ad guy who puts up the billboards. Frances McDormand is unparalleled the repentant but audacious mother who takes on a clergyman and even gives the police a tough time.
With the profanities flying thick and fast, and McDonagh’s treatment (a dim-witted 19-year-old’s confusion between polo and polio draws guffaws), it’s mainstream cinema all right, and the underlying layers of pathos, apart from the dialogues makes it a compulsive one-time watch, although the denouement may not satisfy all viewers.
With a great background score (Carter Burwell) and cinematography by the British, Ben Davis, apart from being nominated for seven Oscars, this bitter-sweet dark comedy is easily one of the best films of this year.