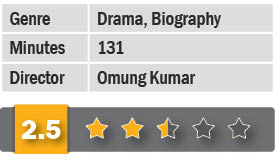 There is no doubt that his recent – successive and overwhelming – victory notwithstanding, Narendra Damodardas Modi has been, inarguably the most charismatic leader the country has witnessed in the last two decades. Omung Kumar, who already has two biographies (Mary Kom, Sarbjit) under his belt was perhaps best qualified to helm this particular venture. This too is a ‘graphy’ alright – though it occasionally tends to veer towards hagiography, at the expense of an authentic biography.

The subject’s (essayed by Vivek Oberoi) career spans his childhood, serving tea under the watchful eyes of his doting father (Rajendra Gupta) and watching his mother (Zarina Wahab) wash dishes at homes with a concerned look… to his monumental triumph in the 2014 elections.

Scripted by Anirudh Chawla and Oberoi, the film abounds in allegories and metaphors – ‘Desh ke liye aankhon mein itne sapne hain ki aankhon mein neend nahi’; ‘Election paison se nahi, logon se jeete jaate hain’; ‘Main red tape nahi, red carpet rakhoonga’; ‘corruption nahi, cooperation’ being just  a few of them. From brewing tea (and instructing his staff how to do it), the 2002 Godhra riots and the dastardly attack on Akshardham temple, the refusal of the US visa in 2005, Modi’s taunt to the opposition, “Main chai bechta tha, desh nahi’, Modi, er Oberoi wears his ideologies and heart on his khadi sleeves. When refused a visa, the alternatives he chose put the US into a tizzy. Omung pulls no punches here – ‘Agar Vallabhai Patel hote toh Kashmir ki yeh haalat nahi hoti’.

Supporting actors – Anjaan Srivastava as Vajpayee, Boman Irani as Ratan Tata, Darshan Kumar as the journalist who tries to trap Modi and comes in second-best, Manoj Joshi as Amit Shah and Prashant Narayanan as the politically and morally corrupt businessman – all play second fiddle (both in terms of screen space and dialogues) to the film’s subject. But the loudest, and free-flowing laughter was reserved for the former Prime Minister who staunchly refuses to utter a word – looking up to his assistant before shaking or nodding his head!! The timing of the release couldn’t be more perfect either! But being inherently a biography, it should have been made with the purpose of perpetuating it for posterity.