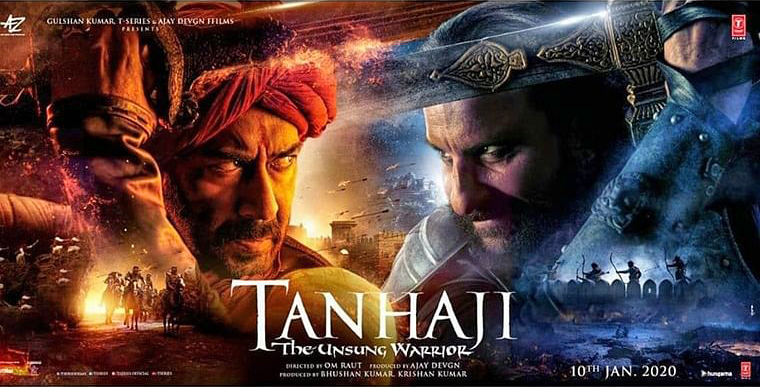 Bollywood certainly knows how to time its releases. Barely a couple of months after the political wrangling in the state subsided, comes an epic involving the greatest Maratha warrior – Chhatrapati Shivaji Maharaj. But then this film is not so much about him as it’s about his trusted lieutenant Tanhaji Malusare, played by Ajay Devgn.

It’s 1647. Shivaji’s earnest desire is to regain possession of the strategic Kondhana Fort (later renamed Sinhagad), one of 23 ceded to Mughal emperor Aurangzeb, under a treaty. His valiant subedar, Tanhaji is the right man for the job. Meanwhile, when Aurangzeb (Luke Kenny) comes to know, he deputes the Rajput warrior Udaybhan (Saif Ali Khan) to tackle Tanhaji’s band of Marathas.
Cinematic liberties abound and the words in the opening title – ‘film is a fictionalised reproduction’ – is a caveat for historians and viewers alike. Historically, it’s a linear progression, and ‘Tanhaji’ is as much about valour and heroism as it is about deceit and treachery. The copious CGI notwithstanding, Om Raut’s (first Hindi feature directorial) and Prakash Kapadia’s story and screenplay (Padmaavat, Bajirao Mastani) cannot be faulted. Japanese cinematographer Keiko Nakahara (Mary Kom) has done a stupendous job, especially in the action scenes (stunt director Ramazan Bulut). The 3D effect and overall visual feel could give Hollywood films a run for its money.

Saif’s unfettered and maniacal villainy, Luke Kenny and Sharad Kelkar’s inspired casting choices and the choreography in the song ‘Shankara Re’ adds to the film’s allure. Kajol, in a not-so-significant role, plays Ajay Devgn’s reel wife. On the minus side, it’s the first half and middle of the second half which gives the film a sluggish feel.