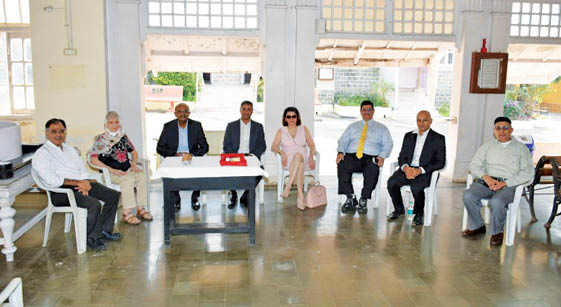 On 12th February, 2021, a brand-new hearse van (Tata Winger BSVI High-roof) was donated to the Parsi and Irani Zoroastrians for transporting the ravaans from residence / hospitals to the Doongerwadi, Mumbai. The hearse was donated in fond and loving memory of Late Mr. Jamshed Khurshed Setna (Ex Non-Executive and independent Director on the Board of Colgate Palmolive India Ltd.) who passed away on 27th February, 2019.

The key handing-over ceremony was conducted at Doongerwadi at the Pandey Pavilion (upper Bungli level) and was attended by Fareeda Jamshed Setna, along with eminent Colgate Palmolive India Ltd. Professionals including the Managing Director – Ram Raghavan; Finance Director – M S Jacob; Legal Director – Surendra Sharma; and Prakash Makhija (Administration). The Board of Trustees of the Bombay Parsi Punchayet was represented by Chairperson Armaity Tirandaz and Trustee Xerxes Dastur.

MD, CPIL – Ram Raghavan paid a rich tribute to Late Jamshed Khurshed Setna, saying, “We fondly remember Mr. Setna as a humble approachable leader, always open to sharing the wealth of his experience garnered during his long and illustrious career with some of India’s most reputed companies. Successive generations of the Colgate leadership team have immensely benefited from this association and will remain eternally grateful.

As a friend, philosopher and guide, he not just believed there was a time and place for everything, he also adopted that belief. He was meticulous, precise and organised. As a Chartered Accountant, these traits served him well. He epitomised those words in every walk of life – be it ethics, beliefs, at work, or his relationship and interactions with his family and friends.”

Thereafter, he handed over the keys of the hearse van to Fareeda Jamshed Setna who then passed on the keys to Armaity Tirandaz, dedicating the hearse for community usage at Doongerwadi. The delegates, then went over to the hearse van and Fareeda Sethna did the coconut breaking ceremony. The hearse van doors were then opened for all to have a look at the interiors. Light refreshments were served to the guests.

Deputy CEO, BPP – Shehnaaz Khambatta thanked the guests for their kind donation. Thinking out of the box and working towards a greener world, the donor and guests were given oxygen-giving house plants instead of flower bouquets by the BPP, as a token of appreciation.