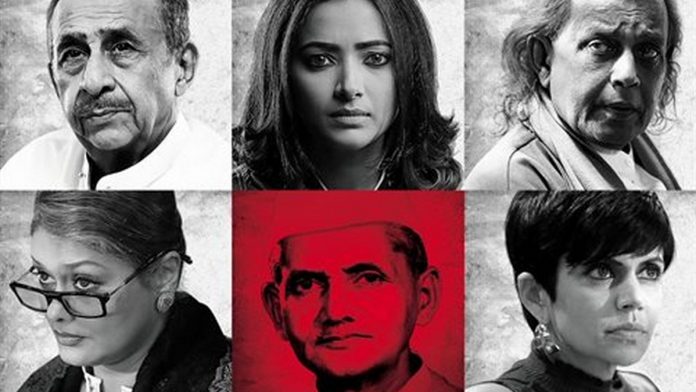 Fifty-three years may not be a long time to reopen a case involving the — mysterious, no doubt — death of India’s second Prime Minister Lal Bahadur Shastri. That he was grossly underestimated and has been almost obliterated from public memory is borne out with the film repeatedly reminding us that though he too was born on 2nd October, a date Indians largely remember only for Mahatma Gandhi’s birthday.

The film opens in unconventional mode, with an EX-KGB agent knocking on the doors of the British Embassy in Latvia in 1992, with a bag-full of dossier containing scoop on KGB’s dirty tricks played out in ‘practically every country on the globe’.

We are then transported to budding journalist Ragini Phule (Shweta Basu Prasad) trying to move up the ladder by publishing unsubstantiated scoops  – till an unknown caller sends her documents and asks her to delve deep into the late PM’s baffling demise.

A commission, headed by politician Tripathi (Mithun Chakraborty) and including historian Aisha Ali Shah (Pallavi Joshi), scientist Gangaram Jha (Pankaj Tripathi), ex-Chief of RAW (Prakash Belawadi), an NGO head (Mandira Bedi) and a late inclusion of Ragini, is the result of her scoop.

Though attempts are made to present the pros as well as cons of the death which occurred on 11th January 1966, barely hours after signing the Tashkent Declaration, it’s a foregone conclusion which way the filmmakers have endeavoured to steer the film. The jury-like proceedings have shades of the 1986 TV film ‘Ek Ruka Hua Faisla’.

‘The only truth in politics is that there is no truth’ we are informed. India was at the heartland of both the Capitalists and Communists, and with Dr Homi Bhabha’s mysterious death just 13 days later and the word Socialist a late addition to Dr. Amvedkar’s Constitution, writer-director Agnihotri opens up a Pandora’s box.

Though the film gets didactic in the closing minutes, it contains valuable slices of history and would be irresistible to students of Indian political history. Also, stay till the end and read the text marked Confidential, but not yet proven.