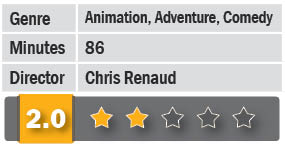 ‘Keeping him safe is a full-time job’, says Max (voiced by Patton Oswalt) of his young master, baby Liam (Henry Lynch). This just about sums up the premise of the hour-and-half long sequel to the 2016 fairly successful and enjoyable, ‘The Secret Life of Pets’.

Katie (Ellie Kemper) falls in love and marries Chuck. Her newborn, Liam, is initially resented by her two pets – terrier Max and the Newfoundland Duke. It’s bedlam when the family vacations at a farmhouse where the sheepdog Rooster (Harrison Ford), pomeranian Gidget (Jenny Slate) and bunny Snowball (Kevin Hart) reside. Then there is a subplot where Max’s favourite toy Busybee finds its way into an apartment filled with scores of cats. Add to that another side story where Snowball, with the help of his friends frees a white tiger Hu from his cruel circus owner Sergei, whose faithful companions, a pet monkey and wolves are all over the place.
Making this sequel barely seems justified – even if one considers the short runtime of under 90 minutes. The animation is average and the many characters – and subplots do nothing to make the film absorbing. The prequel was enjoyable as it had a humorous take on what pets are upto when their owners are away. This one, despite being voiced by almost the same actors, written again by Brian Lynch and directed by animation veteran, Chris Renaud, does nothing to elevate the tone of the film. Strictly for kids.