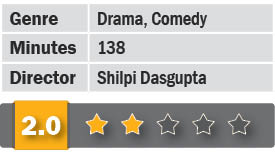 45 years after ‘Gupt Gyan’, the first sex education Hindi film was released, debutante director Shilpi Dasgupta comes up with a film centred around a sex clinic. A few years ago, we had well-made flicks on the subject – Vicky Donor and Shubh Mangal Saavdhan. Sonakshi Sinha plays the protagonist Babita (Baby) Bedi, who inherits her mama Hakim Tarachand’s (Kulbhushan Karbanda) Unani dawakhana in the town of Hoshiarpur, which specializes in handmade concoctions designed to treat fertility problems, erectile dysfunction, premature ejaculation and more. Her late mama had, however, laid down two conditions – she has to run the clinic for at least six months before she can sell it; and she should look after (read: treat) all his existing patients.

While the premise of the film cannot be questioned, the two-hour-plus runtime is riddled with mediocre writing, including long-winded monologues, especially in the first half. The supporting cast – Varun Sharma as Baby’s brother Bhooshit; and Piyansh Jore as Baby’s love interest, have barely any screen time or effective dialogues to prove their worth. As Baby’s mother, Nadira Babbar, with a couple of in-house jokes, and Annu Kapoor as the lawyer Tagra, do their best. Punjabi rap star, Badshah, in psychedelic attire, plays Ghabru Ghatak – Baby’s high-profile client. His opening number ‘Saans toh ley ley’ is some consolation. The film perks up immediately after the first half and towards the end, but still seems a case of too little, too late.