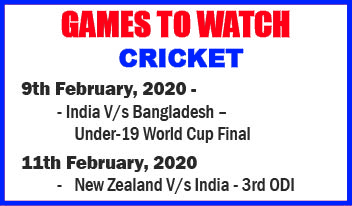 India Under 19 Storms Into World Cup Final: A prolific unbeaten 105 from Yashasvi Jaiswal coupled with 59 not out from Divyansh Saxena ensured India Under-19 a ten-wicket victory against arch-rivals Pakistan Under-19 during the first semi-final clash. Defending champions India will now take on first time finalists, Bangladesh in an epic finale. Batting first, Pakistan were bundled out for 172 in 43.1 overs. The Indian bowlers were on top of their game as Sushant Mishra picked (3-28) while Kartik Tyagi grabbed (2-32) and Ravi Bishnoi snapped up (2-46). When asked to chase down the total, India cruised to victory in style as the opening pair of Jaiswal-Saxena helped India reach 176-0 in 35.2 overs.

Djoko Wins Australian Open: Novak Djokovic emerged victorious at the Australian Open claiming a record eighth title and returning to World Number One seed in the process. He grabbed a 6-4, 4-6, 2-6, 6-3, 6-4 win against Dominic Thiem, in a near four hours, hard fought contest.