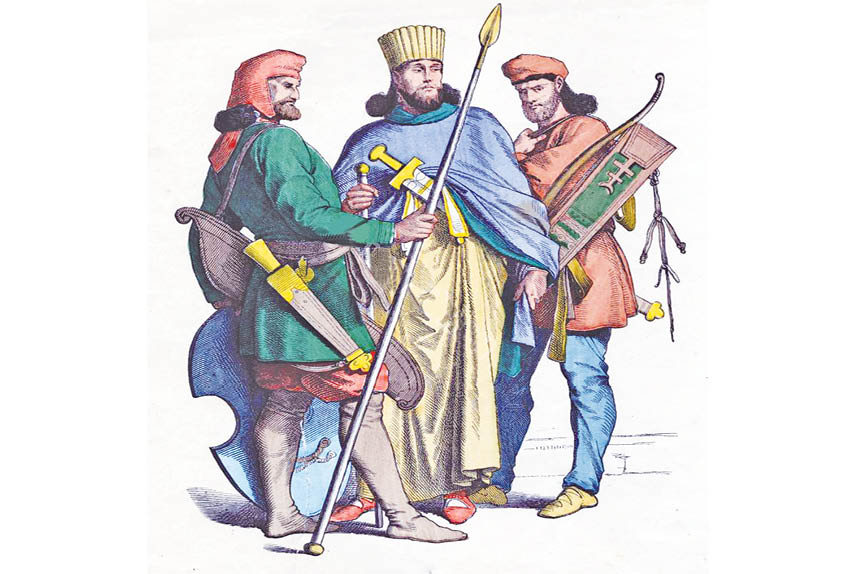 Aderbad Bin (son of) Mahrespand was the Mobedan Mobed (Supreme Pontiff) and Prime Minister during the long reign (309-379 A. D.) of Shapur Hormazd also known as Shapur II. According to the Pahlavi Dinkard, from his father’s side, Aderbad Mahrespand belonged to the family of Zarathushtra, and from his mother’s to the family of Shah Vishtasp.

During Shapur’s reign, Christianity was being propagated all over the then known world with missionary zeal. The Roman Emperor Constantine had accepted Christianity and he tried to interfere with the internal affairs of the Iranian Empire under the pretext of protecting interests of the Christians living in Iran. From the common man to members of the Royal family, Christianity began to make inroads and shake the ancient Zarathushtrian faith to the extent that it seemed that soon even Shapur and his nobles would convert to the new faith.

It was at this critical stage in Zarathushtrian history that Aderbad Mahrespand, the Magupalan Magupat (the highest among the Magavs) performed a miracle to prove both – the power of the Zarathushtrian religion; and his own religious leadership as the Raenidar of the then new age.

Raenidar is a Pahlavi word meaning ‘spiritual leader’, ‘promoter of the religion’, ‘saviour’.

The Pahlavi Dinkard says Aderbad Mahrespand went through an ordeal where several men poured molten metal over his bare chest. As a result of his piety and spiritual powers, he was able to pass this ordeal without any harm. It is said the molten metal felt like warm milk on this pious Raenidar since he was pure (in thought, word and deed) and truthful.

After this ordeal Aderbad Mahrespand also had court and public debates with leaders of other faiths and intellectually proved the supremacy of the ancient Zarathushtrian faith. By dint of his piety, rectitude, wisdom and learning, Aderbad Mahrespand rejuvenated the religion and established faith among the believers of Ahura Mazda.

Aderbad Mahrespand used to derive six kinds of comforts when misfortune would befall him:

Having restored the Zarathushtrian faith among his people, his next task was to consolidate the scattered fragments of the Avesta.

Three centuries before the birth of Christ, Hermippus the Greek had made a reference to two million hymns of Zarathushtra. Much of this was lost when Alexander invaded Iran. In Parthian times, King Valakhsh (Vologases) ordered the collection of the scattered portions of the Avesta. In like manner, during Sassanian times, Ardashir Babagan deputed his High Priest and Prime Minister, Herbad Tansar with the task of compiling the fragments of the Avesta.

Many of the prayers, which we pray from the Khordeh Avesta today, were composed by the pious Aderbad Mahrespand. Amongst others, he is said to have also composed the Patet (prayer of repentance), Afrin (blessings) the Pazand Setayesh (adorations) as also the Pazand Nirang we recite at the end of various Avestan Yashts.

Aderbad Mahrespand was also a store-house of worldly wisdom and some of his sayings are of timeless relevance. Here is a small sample from the Pand nameh:

May Raenidar Aderbad Mahrespand continue to bless us and guide us from the spiritual world and help us all become better and spiritually stronger Zarathushtrians!