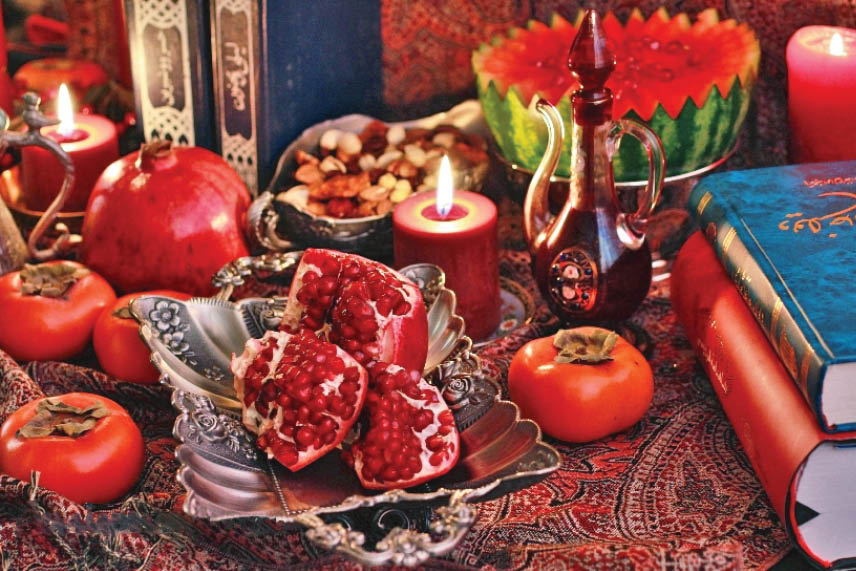 Today, many across the globe will celebrate Christmas Eve and tomorrow, the Christmas feast or holiday. Iranians would have already celebrated the feast of Yalda on 21st December. Interestingly, the festival of Christmas has similarities or rather roots in the ancient Iranian feast of Yalda, which celebrates the winter solstice in the Northern hemisphere. While we ponder some similarities, let’s ensure we live up to the spirit of these meaningful festivals.

Yalda is the longest and darkest night of the year (observed on 21st December 2022), marking commencement of the winter season of three months. Winter will end around 21st March, 2023, ushering the spring season.

Since the first night of winter (21st December) is the longest night and from that night onward the days start to gradually get longer and the warmth and light of the sun increases, that night is believed to be the time for the birth or re-birth of the sun.

In Iran, instead of red bauble balls, people tie pomegranates (fresh or dried) for health and long life on living Cypress, Fir or Pine trees. It is also a traditional practice to leave gifts of sweets or others useful items under the tree for family, friends or the needy. Trees in courtyards and village squares usually get covered with snow and in the morning, when the sun comes out after a long, dark night, the rays would usually bounce off the ice on top of the tree and look like a star. This beautiful morning is celebrated as Yalda – the birth or the re-birth of the sun, which would continue to grow in strength and brightness till the next Yalda night.

‘Wise Men’ At The Birth Of Jesus: Traditional, nativity scenes depict ‘Wise Men’ visiting the infant Jesus on the night of his birth. There is also a belief that these ‘wise men’ were Zoroastrians from Iran because they had come from the East and in Iran Mazdayasni Zoroastrians were known as worshippers of Mazda or Wisdom. We also need to remember that when Jesus was born, Iran was under the Parthian Dynasty with Zoroastrianism as the dominant religion and the Magus or Magi were priests. Of course, many scholars also dispute the theory that the ‘wise men’ were from Iran and whether they were three or more in number.

The New Revised Standard Version of Matthew 2:1–12 describes the visit of the ‘wise men’ in the following manner: “In the time of King Herod, after Jesus was born in Bethlehem of Judea, wise men from the East came to Jerusalem, asking, ‘where is the child who has been born king of the Jews? For we observed his star at its rising, and have come to pay him homage.”

Although Matthew’s account does not explicitly cite the motivation for the journey of the wise men, (other than seeing the star in the east, which they took to be the star of the King of the Jews), the Syrian Infancy Gospel states in the third chapter that they were pursuing a prophecy that they had read about.

Interestingly the sun is a star and “observing the star (or the sun) at its rising” indicates Yalda or Birth.

There is also an Armenian tradition identifying the Magi or Wise Men who came to Bethlehem as Balthasar of Arabia, Melchior of Persia, and Caspar of India. Historian John of Hildesheim also relates a belief in Taxila (in modern Pakistan) that one of the Magi had taken the ancient ‘silk route’ through Taxila on the way to Bethlehem.

Celebrating The True Spirit Of Yalda And Christmas: Are festivals like Yalda and Christmas only about eat, drink and be merry! Certainly not! In fact, both feasts celebrate the spirit of gratitude, togetherness and giving. While Christmas celebrates the birth of the ‘Son of God’, Yalda celebrates birth of the ‘Sun of God’! In both cases ‘birth’ heralds ‘new beginnings’. It’s a magical season to bring joy, love, and togetherness to families, friends and to this world.

We all realized during the pandemic that we are inter-dependent and that joy comes more from giving than just receiving. Have we now become complacent? Have we forgotten the lessons learned during the years 2020 and 2021? Yes, it is the season to be merry or happy. But, let’s not forget Zarathushtra’s message that happiness comes to those who make others happy or the message of Jesus to ‘love thy neighbor as thyself’.

Do spend time with family, but don’t forget to also spend time with lonely friends or neighbour. Do spend money on gifts for family and friends. But, don’t forget those who have no family or friends. Most importantly, let us all focus on ‘well-being’ – our own and that of all others on planet earth. After all, we are all inter-dependent, be it for our health, our wealth or happiness.

It’s time we realized that the only way anything exists is through a complex interplay between other existing things and the magic of circumstance. Indeed, the true nature of existence is interdependence. This festive season, let’s celebrate interdependence, our unity amid diversity and the birth or rebirth of a brand new world, through wise choices that we will exercise.