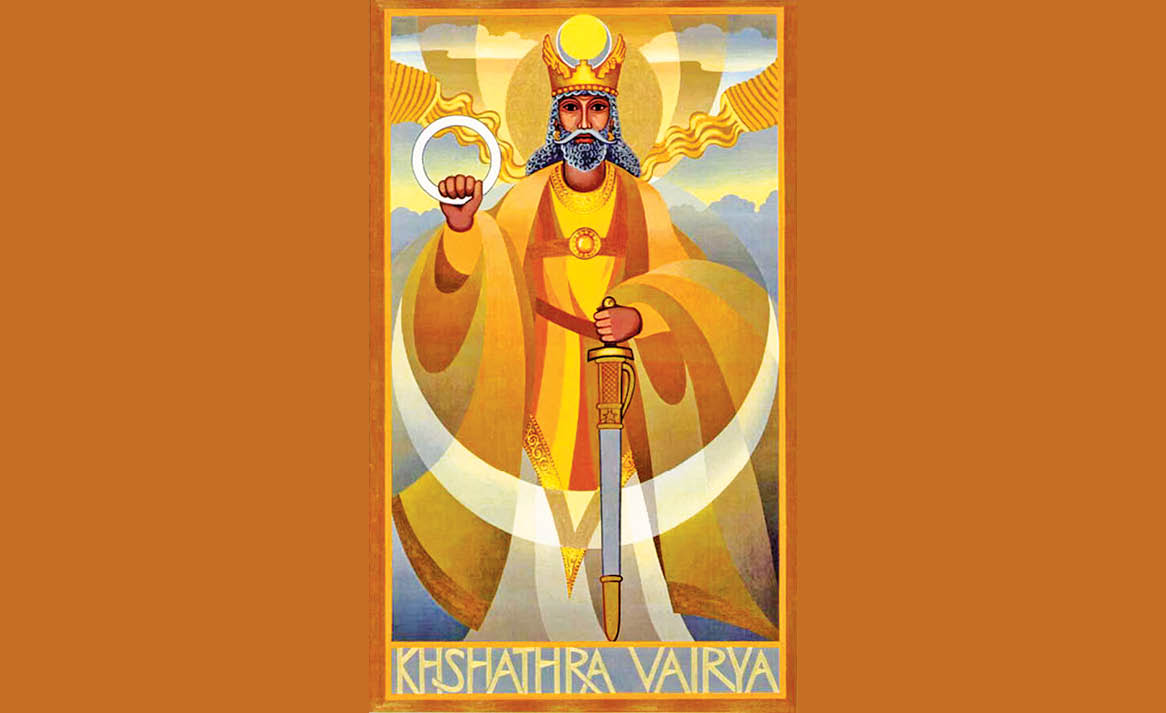 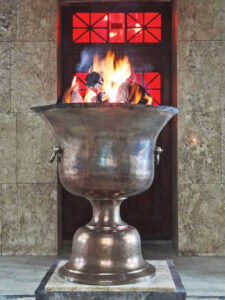 We are now in the holy month of Shehrevar (Avestan Khshathra vairya), which represents Ahura Mazda’s ‘desirable dominion’ and is the Amesha Spenta or Archangel presiding over metals and minerals.

The Zoroastrian religion has influenced the three Semitic religions (Judaism, Christianity and Islam) in many ways and in particular, the concept of the ‘Kingdom of Heaven’ or later, the ‘Kingdom of God’ is, according to some scholars, derived from the concept of Khshathra Vairya. The term is believed to have been adopted by Judaism when Israelites were freed from Babylonian captivity and slavery by Cyrus the Great, who incorporated Babylon into his Achaemenid Empire in 539 BCE.

Strength And Power: Shehrevar’s qualities are strength and power. Shehrevar wields both righteously to usher peace and Ahura Mazda’s ‘desirable dominion’ in this world. One may tend to think that strength leads to violence and power cultivates arrogance. However, Shehrevar (visualized as wearing a battle helmet and wielding a spear and a shield) is the role model for ever Zoroastrian in terms of Divine Strength (to do good) and Righteous Power (to the right the wrongs). Peace cannot be ushered by those without power and violence cannot be curbed by the weak. Therefore, strength and power from a Zoroastrian point of view are positive, as long as both are used righteously.

Righteous Power: Khshathra Vairya means ‘Righteous Power’ and represents the ‘Power’ to settle in peace. The Vohu-khashatra Gatha (Vohu = Good and Khashatra = Power or Strength) elucidates the power of doing good deeds. It says: “That man, who performs all his actions as an act of worship through Asha’s Law, is deemed as the best by Mazda Ahura. Those who have been in the past and who are such at present, I shall, with reverence, recall them by name, and shall try to reach their high position by righteous deeds.” This Gatha relates to Yasna 51 wherein Zarathustra elucidates that excellence comes through righteous actions performed as acts of worship. Thus righteous actions are the best form of worship and such actions reap strength and empowerment.

Sahrewar is a Pahlavi term for ‘the best rule’ – the best rule that comes with Divine Strength and Righteous Power. Shahenshas or kings of ancient Iran were all inspired by this Divinity and ruled their vast kingdom on the principles of justice and equality. Kings like Cyrus the Great and Queens like Pourandokht are classic examples.

Importance Of Strength: Evil cannot be resisted by a weak body or a weak mind. Therefore, from a Zoroastrian point of view, weakness and disempowerment are looked down upon as an affliction of evil. In Zoroastrian theology, Khshathra Vairya is a cosmic prototype for the world of Ahura Mazda, i.e. heaven which would be peaceful and ruled by just kings using their strength and righteous power.

The human body itself requires various metals and minerals, albeit in small quantities, to stay healthy and strong. For example, the lack of iron can make one anemic or feeling very weak while lack of calcium leads to osteoporosis or weakening of the bones.

Wise Use Of Metals And Minerals: According to the Shahnameh or the Book of Kings, it was Shah Jamsheed who discovered the use of metals during the Peshdadian dynasty. Gold and silver were used extensively during Achaemenid times – as per Greek historians, the roofs of homes in the innermost city of old Ecbatana (modern Hamadan) were tiled with gold and silver. Ecbatana was a summer capital during Achaemenid rule.

In the Pahlavi book, ‘Zarathushtnameh’, it is stated that after receiving Divine Revelation from Ahura Mazda, when Zarathushtra was counselled by each of the Amesha Spenta, Shehrevar’s message to mankind, through Zarathustra the messenger of Ahura Mazda was: “use metals wisely”. In other words, use metals for peaceful and progressive purposes not violent or regressive purposes.

When priests offer baj they use metal rods for ritual power. During higher liturgical ceremonies, the water that is ritually purified and energized and poured back into the agyari well from which it is drawn, is collected in a metal karasyo or tumbler.

During Achaemenian times, fire altars were made of stone and we see ruins of such fire altars to this date, near Naqsh-eRustom in South Iran. However, in India, Parsis enthrone the Holy Fire on a metal afarganyu or vase. The Holy Fire is referred to as ‘Atash Patshah’ or the Fire King and it is only appropriate that the holy fire is enthroned on a metal afarganyu symbolizing Shehrevar’s strength and power.

Celebrating Shehrevar: Traditionally Sharivargan or the parab of Shehrevar would be celebrated in ancient Zoroastrian Iran by lighting fires (fire is energy and therefore a source to good health, strength and the warmth of friendship) and reciting the Gatha, especially Yasna 51. The day would also be spent helping empower the weak and doing general acts of charity and kindness.

Many also believe that Cyrus the Great was born on Roj Shehrevar of Mah Shehrevar (though this cannot be historically proved) according to the calendar of that time. Today Iranians (both Zoroastrians and Muslims) perceive Cyrus as a father figure and therefore, many of them observe the fourth day of Shehrevar as ‘Father’s Day’.