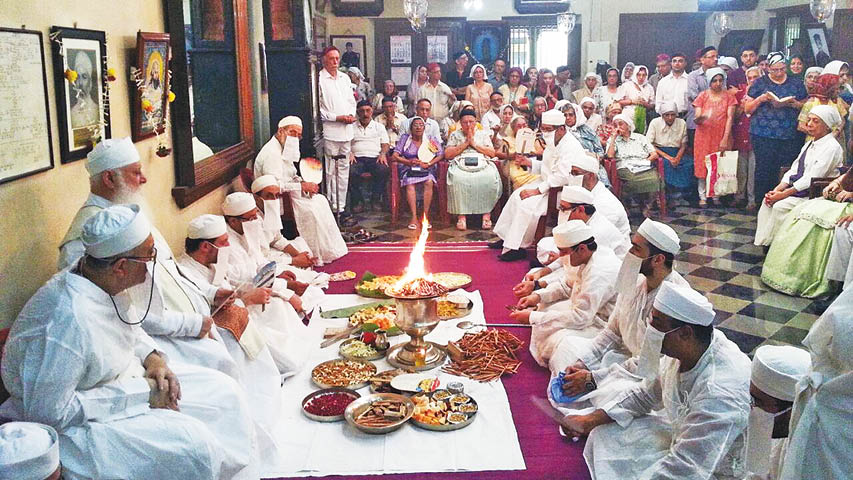 Dadysett Aatash Behram at Fanaswadi, Mumbai was packed on the eve of 4th December, 2016, for the inauguration of a Shrine dedicated to Behram Yazad, located in the renovated hall, next to the Aatash Behram, organised by the Trustees of Dadysett Charity Trust. “This is the ﬁrst Fire Temple in India where such a glorious enshrinement has been performed due to divine inspiration. This project materialized only because Behram Yazad Himself desired so, and thanks to the enthusiastic support of my Trustees”, adds Er. Darayesh R. Katrak.

Thereafter, all the Trustees lit the ﬁrst oil lamp, ‘Divo’, together. A Hum Bandagi was then led by Er. Darayesh Katrak. The crowd venerated the shrine and then gathered in the hall where Er. Katrak spoke about the importance of worshipping Behram Yazad.

Khursheed lcchaporia compered the evening. Trustee Behram Ardeshir expressed gratitude to generous donors who wished to remain anonymous, saying “We are extremely fortunate to have such dedicated people who support us in the background. These people are unsung heroes. And thanks to our honourable Secretary, Er. Darayesh Katrak, an extremely dedicated man. No religious institution can be complete without our Dastoorjis and we are so fortunate to have Er. Pervez Nalladaru. Our capable Assistant Secretary I of the Trust, Hoshang Kharas, is also an ‘ immense asset.”

Er. Darayesh Katrak explained, “Every religion understands the superpower of God, Ewhom we call Ahura ’ Mazda, who looks after the Universe and all :His creations. Ahura means ‘Lord’, Mazda means ‘Wisdom’. The highest form of Holy Fire, Aatash Behram, is named after Behram Yazad. Behram Yazad is called ‘Mushkel Aasaan’ because he solves our ‘Mushkeli’, fulﬁls our wishes and helps us to attain success. He ensures victory for His righteous devotees. In the Behram Yasht we pray ‘Behram Yazad Firozgar Dushman Zadaar Amahe Hutashtahe Berasad’, meaning ‘May the Victorious Smiter of Evil, Behram Yazad, and the Angel of courage, Amahe, come to help me.’ Amahe, the Yazad of courage, is the co-worker of Behram Yazad. The ﬁrst ten Kardas of Behram Yasht describe the ten forms which Behram Yazad appears in to help His devotees, viz, wind, a bull, a white horse, a camel, a pig, a youth, a raven, a ram, a goat and a warrior who smites evil. A righteous person who prays the Behram Yasht deﬁnitely receives His help”.

The number 40 is immensely signiﬁcant in the Zoroastrian religion. “If you pray the Behram Yasht sincerely for 40 days and your wish is granted, consider yourself lucky. If it is not fulﬁlled, consider yourself more lucky”, said Er. Katrak. “If a wish is not fulﬁlled, it is because Behram Yazad wills it so. “Even Dastoorane-Dastoor Neryoshang Dhaval invoked Behram Yazad’s help and vowed to consecrate an Aatash Behram in His name if they landed safely. The storm calmed down and our ancestors arrived safely in India.” Er. Katrak has announced that on each Behram Roj, a Humbandagi will be held at the Shrine in the evening.

Light entertainment preceded a delicious vegetarian Gambhar, sponsored by the Trustees of the Parsee Vegetarian Temperance Society and catered by Ketayun Khambatta. 1,202 humdins dined, setting a new record of attendance at a Vegetarian Gambhar at Dadysett Aatash Behram.