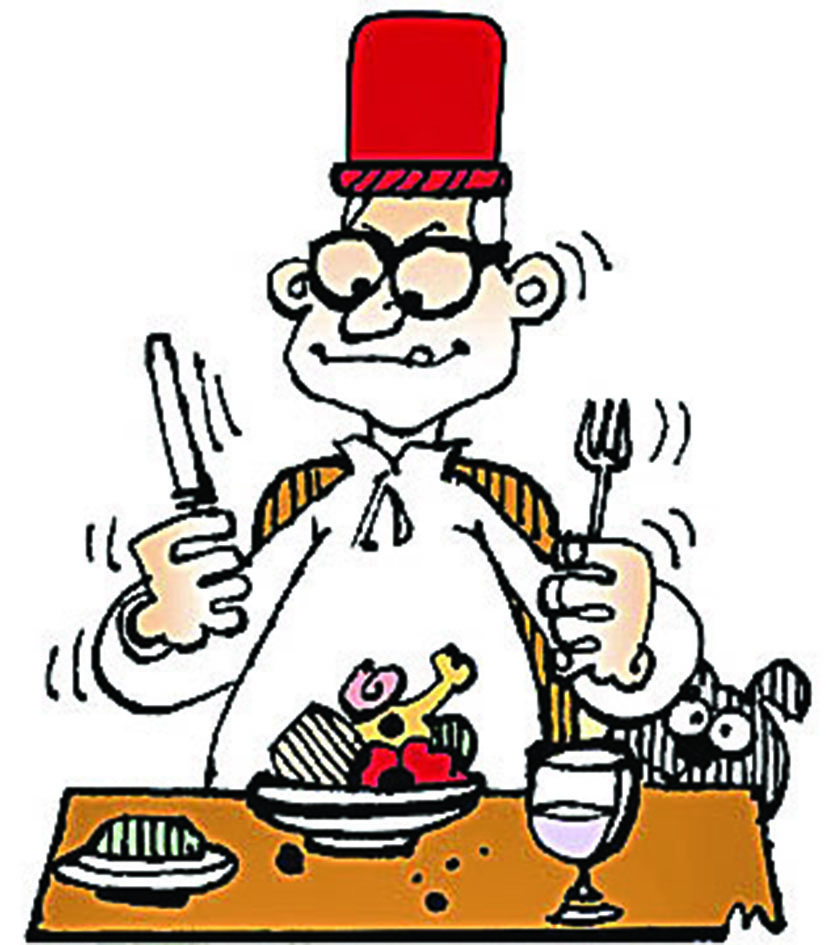 The Bawa-relationship with food is legendary. Our unwavering love for food could put to shame legendary love stories like Romeo-Juliet… Attempting to explore just that, in his inimitable style, is PT Writer and foodie – Dara Khodaiji.

There is a mistaken notion that the way to a man’s heart is through his stomach. This is a fallacy. A man is all stomach, especially a Parsi. It is not a via-media to anything else. His love for food has led him to plagiarize culinary marvels from all over the world. I find it hard to believe even for a moment that dhansak was an original Parsi dish. There might have been a feeble resemblance to it in Iran but the concoction of lentils with mutton and vegetables appears to have a post-landing, Indian touch. Especially its hot, spicy taste. Iranians are chillie eaters even though they use spices more for their flavoring. They want their food ‘bidun filfil’, meaning without chillies.

Parsis will not just try any food anywhere in the world, but we will also try to make it suitable for our own palate. It is because of our congenital love for food. If a bawa sees anything new, his initial response is, “aay su che? Aav-va de!” Thank God he has not tried to make “Foi-gras per eeda!” France would have sued India or maybe the BPP for such an infraction!! Or in all probability, would have awarded Pillamai, Soonamai or Jilloomai a Legion d’honneur for it.  Who knows, food does strange things! But I am sure a good meal always has a salutary effect. Rarely otherwise.

Wars have been fought for a piece of land, big or small. They have been fought for and over beautiful women like Helen of Troy. They have been fought for royal slights and insults, spread of religion and a thousand other reasons but never, never for food or what I would call a culinary plagiarism. Recipes are borrowed, pilfered and plagiarized, but they have never been a cause of war. Like music, food knows no boundaries. What we eat today, might have had its origin elsewhere in the world, at a different time.  Like croissant, that divine flaky pastry. Many believe it is of French origin… but it is actually of Viennese origin. Also, it is the later day version of a pastry called Kipferi, a favourite of Marie Antoinette. I had eaten the best croissants in a hotel in Munich in Germany. But it led to no war. If only Mrs. Trump was the POTUS and Mrs. Putin looking over the fortunes of Russia, there would have been no cold, hot or lukewarm wars. Mrs. Putin would give recipes of ‘okrosha, shchi, ukha or Borscht’ and Mrs. Trump would tell her Russian counterpart, “Look sweetheart, I just got a superb recipe from May of UK, a great one about some soup called Mulligatawny. Take it down!”  And of course, between Mrs. Khan and Mrs.-er- Rajnath Singh. There would peace on earth and good-meal among men!

“Darabshaaaaa! Su karoch! Taiyar thai jao. Aapri Perin Petigara has invited us to her place for dinner. She is so sweet. Mae kahyu ke maru cylinder is empty and no gas today, so she said aaje mari sathe jamjo!”

“What! Perin and you are not on talking terms since about a fortnight,” I protest.

“Hrumph! Enough woman! She called me Bevro? Damn-it, Ok! I was a bit wobbly but certainly not drunk. I am not going, nor should you,” said I.

“Chalo ave! Ahna-bahna na karo,” she said, sounding almost like my editor. I relented and I was ready to go. There is a lesson in it… Perin serves a great dish of dahi-nu gosh and divine akuri-na patice. Good food melts down all umbrages!

I’ll give you the example of my brother-in-law, that good-for-nothing saala of mine. The fat slob drinks up my good Scotch and then, in front of others, asks me if I am still writing my bakvas-bhareli articles! He’ll say, “That you’ve not been thrown out of the press-club for all your bilge is a wonder!” So now what I do is I ply him with a huge slice of my speciality, chicken malaiwala, and a lot of whatever else is on hand and hoping he chokes on it before he starts drinking. The good food mellows him down to an almost human level.

Ah! Food. Beautiful food! Food that sizzles and food that frizzles. Roasted or toasted, boiled and broiled, fried deep or shallow, pungent or mellow…. Soupy and slurpy, flambé or puree, sweet, sour, blistering hot or hellish bitter – all have a place in my heart. They satisfy all my senses. The sound of a sizzler being served; the sizzling sound called chaunka (an onomatopoeic word for tempering) in Hindi; the crunchy sound of the flaky pastry bite…. A beautifully decorated dish of which the French are the masters! The rich fragrance of a well-cooked dish! The texture of creamy sauce or a crunchy pastry – all these please a gamut of senses that bring pleasure to our soul! Eating well is an aesthetic pleasure. I am in total agreement with Oscar Wilde and Sir Winston Churchill, who both expressed the same sentiment, in almost the same words, “My tastes are simple: I am easily satisfied with the best!”

11 August 2018 Issue, Bawa love for food, Humour, Parsi New Year, The way to a bawas heart is through his stomach