From the morbid subject of death that we read in the last instalment Of ‘Idioms aren’t Idiotic’, we now explore the subject of birth, especially those privileged ones born to a rich family…

To Be ‘Born With A Silver Spoon In The Mouth’:  It was back in time, in England, when the majority of the people in the middle ages used to have wooden cutlery. It was only the wealthy who were fortunate to have metal spoons. Silver spoons were often given by the wealthy godparents to their God-children on the day of their christening. Thus came into existence the idiom, ‘Born With a Silver Spoon in the Mouth’, which meant being born in wealth and a life of luxury.

To Be ‘Filthy Rich’: When some are so rich that they do not have to ‘penny–pinch’ in order to have anything, however expensive – is said to be filthy rich. The word originated in or around fifteenth century. The word for wealth or money then, was lucre. The word was used negatively. The term filthy lucre was used to denote foul or filthy money, blood money or today’s analogy to black money. This in time became ‘filthy rich’. Today, the term filthy rich has lost its negative sense and simply refers to the magnitude of wealth. 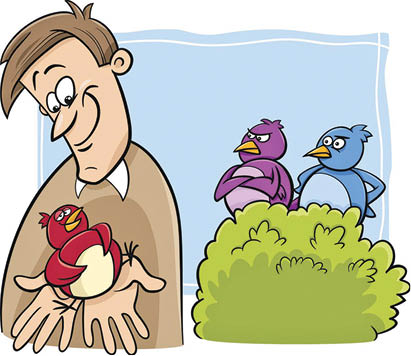 ‘A Bird In Hand Is Worth Two In The Bush’: The origin of this idiom goes back to the 14 century or even earlier in medieval England. This proverb means that one has to be satisfied with what one has rather than take a chance and risk losing everything. This is one interpretation. The other being that Falconry as a sport was a great favourite of kings, nobles and the wealthy. A trained falcon or hawk was a very valuable bird of prey. The bird in hand is actually the trained bird of prey, a natural hunter which was worth more than two in the bush, the prey. The first interpretation is more suitable and acceptable in modern times but both, in their times must have been accepted.

To ‘Break The Bank’: Sorry folks, this has got nothing to with a bank burglary or a movie about it like ‘The Highway 301’ or ‘A Nice Little Bank that should be Robbed’. It has no connection with any bank at all. ‘To Break the Bank’ is to use up or spend all the money. The phrase started in the USA and is related to gambling, where, if a gambler wins in excess of what the casino or the club has at its disposal, then the winner is supposed to have ‘Broken the Bank’. 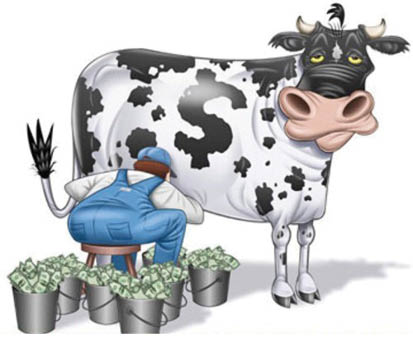 A ‘Cash Cow’: This is a business term wherein an investment brings in good and consistent results. This term has its origin in Dairy farming, where certain dairy cows produce milk in huge quantities for a long spell of time without any problem, hence bringing in huge profits to the farmer.