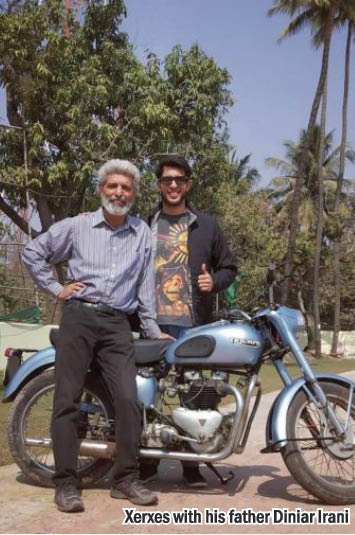 Hailing from Cuttack (Odisha, formerly Orissa), Xerxes Diniar Irani made history by becoming the first-ever contestant from Odisha to qualify for the ‘Culling Round’ of the popular Reality TV series, ‘Roadies Real Heroes’. Pitted against another hopeful participant during the auditions, Xerxes’ patience and physical abilities impressed judges – Rannvijay Singh, Neha Dhupia and Sandeep Singh, to see him through to the next round.

An alumnus of Stewart School, 27-year-old Xerxes is a national level sportsman, an entrepreneur and social worker. When asked about what made him venture onto a completely different path as this, Xerxes expressed his desire to put Odisha and the Odia youth, who have been grossly underrepresented and misunderstood in national media, on the map. “Roadies is a platform where you can showcase your talent. …it’s a childhood dream come true since I have grown up watching Roadies on TV. I want to become a youth icon and represent my state. Basically, I want to gain some popularity… to promote a sports academy which I hope to open very soon. As someone who loves the outdoors, adventure sports and anything that challenges my physical capabilities, Roadies was the perfect fit for me,” said Xerxes in an exclusive interview with Orissa POST.

Belonging to family with a strong background in sports, Xerxes’ father, Diniar Parvez Irani, is a former Olympian who was part of the Indian National Basketball team in its only Olympic appearance at the 1980 Summer Olympics (Moscow). His mother, Gayatri Devi Irani, a princess belonging to the Ranpur royal family, has been a national level Basketball player as well; and his sister, Dilnawaz, is a former district level swimmer.

After completing his schooling, Xerxes studied for two years at Ravenshaw University before moving to St. Xavier’s College in Kolkata for his graduation. A stint with Decathlon Sports was followed by an entrepreneurial job that saw him open one of eastern India’s first Laser Tag arenas. A social worker as well, Xerxes was involved with ‘Bridges of Sport,’ an NGO primarily focused on offering a platform to promote sporting excellence among remote and tribal communities in India. He plans to register his own sports based NGO soon. “I want to cater to promoting sports at the grassroots level, providing support through equipment, coaches, training facilities and identifying talent in rural India,” says Xerxes.

Describing his experience in the Roadies studios, Xerxes concluded, “It was exhilarating, it was exciting, it was like a dream. Meeting so many talented people from all across India was beyond exceptional.”