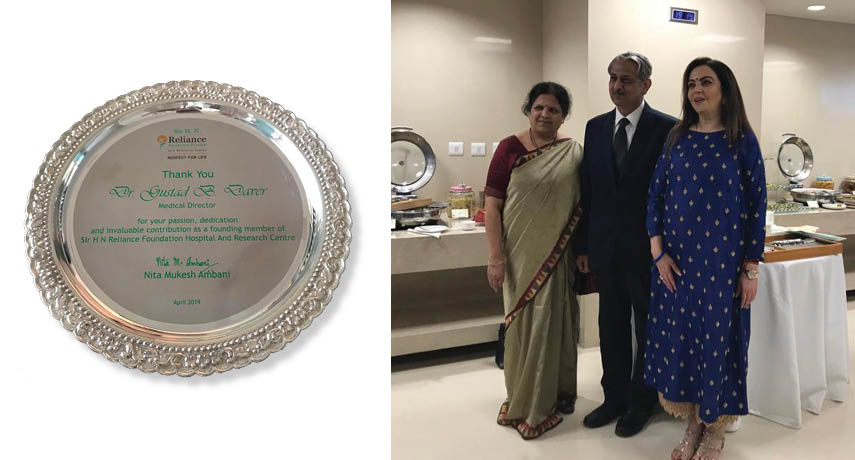 Dr. Gustad B. Daver, Medical Director and Head of Surgery of Sir H N Reliance Foundation Hospital and Research Centre, added yet another feather in his cap, being appointed Medical Advisor to Reliance Foundation, earlier in April, this year. A leading Vascular and Thoracic Surgeon, Dr. Daver was given a grand farewell at the Reliance Hospital, where he served as Director since its inception. The occasion was graced by none other than Neeta Ambani, who commended his contributions to the Hospital and welcomed him to the Foundation.

Through Dr. Daver’s thirty-six years of rich experience, he has received numerous awards including ‘Best Doctor Award’ from the Indian Medical Association, Mumbai. Prior to this, he was a Director and Consultant Surgeon in General, Vascular and Thoracic Surgery for nine years at P D Hinduja National Hospital and Medical Research Centre. He has also served as the Dean of Grant Medical College and Sir JJ Group of Hospitals, and been a faculty across various Medical Colleges. Dr. Daver completed his Post-Doctoral Fellowship at Baylor College of Medicine, Houston, Texas and is currently the President of ‘Zonal Transplant Co-ordination Cell’, Mumbai, for Organ Transplant. He is also the founder member of Vascular Society of India and Infective Disease Society of India, and the recipient of ‘Life Time Achievement’ award for meritorious service by SEWA (Social and Welfare Association).

Heartiest congratulations Dr Saber Gustad. We are proud of you.