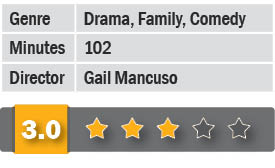 The tears may not flow as copiously as they did while watching the prequel ‘A Dog’s Purpose’ a couple of years ago, but be prepared, this one too is a weepie.  The journey picks up from where Purpose trailed off – Ethan (Dennis Quaid) and Hannah’s (Marg Helgenberger) granddaughter’s (CJ) bonding with their dog Bailey (again voiced by Josh Gad) is negated somewhat by Gloria, their alcoholic daughter-in-law’s (Betty Gilpin) animosity towards them. One day, Gloria leaves with the toddler CJ leaving the latter crestfallen – at parting with her Bailey. When later, the pet has to be put down due to an incurable disease, Ethan whispers in its ears that it should look for, and after, CJ in its next life.
That sets into motion a series of the canine’s teary-eyed transitions of births and rebirths. While the prequel had more doggy bits in it, this one is more of CJ (Clarity Jane) – played by British TV actor Kathryn Prescott. Her fortuitous meetings with different canines – a Beagle Molly, an African mastiff Boerboel, and a fiercely possessive Yorkshire terrier Max, have just one purpose in their journeys on this earth – to look after CJ’s well-being and, if possible, to reunite her with her estranged parent and grandparents.
Acclaimed TV-series director Gail Mancuso tries to be faithful to the sentiments of Purpose, but the script, which deviates with a subplot or two, and has some genuine funny lines in Josh Gad’s voicing of Bailey, prevents that from happening. W. Bruce Cameron, a former self-help book writer, has authored and co-scripted – both the films besides ‘A Dog’s Way Home’, earlier this year.
Not all tender moments are reserved for the four species of canines. The relationship between CJ and bestie Trent (Canadian pop star Henry Lay) has been explored well, though the sub-plot of his illness is dismissed hastily. Performances are decent in this rather well-crafted film; one mustn’t fail to recognise the contributions of the canine trainers.