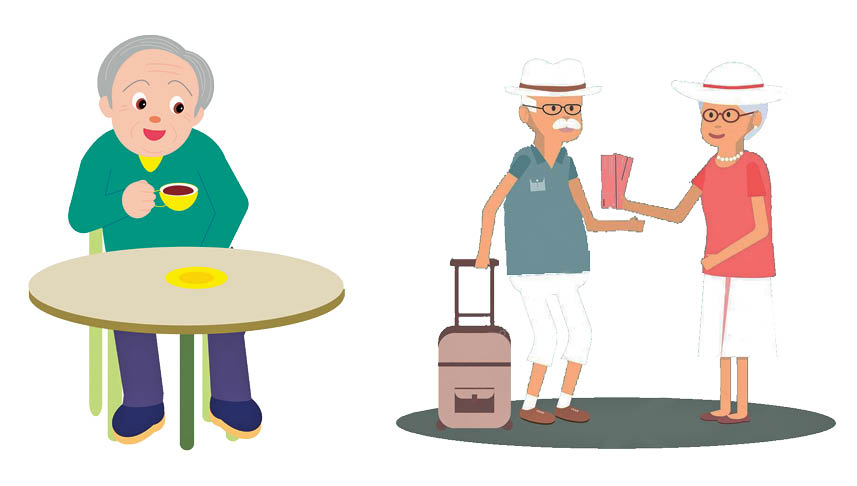 In keeping with the ongoing summer season, PT Writer extraordinaire, Dara Khodaiji presents a hilarious Bawaji Travel Story-Series with the Famous-Four – Darabsha, Ruttimai, Sorabji and Perinbanoo, filled with humour and fun, to kick off that perfect weekend mood!

A month and a half of hectic preparations, booking ticket, visa, completing required formalities and a hell of a lot of shopping later, the zero hour had almost arrived. Bags loaded, weighed, unloaded and weighed again till the required weightage was achieved and finally the alarm clock announced 2:30 am. If you try waking up Darabsha at that ungodly hour, you would hear a barrage of the fruitiest Parsi expletives, in English coupled with a mélange of our Bharati bhashas too, all mixed like Kolkata’s jhol muri!  But on that Saturday morn, he jumped out of bed as if he had received a surprise-injection on his derriere! Sorabji was also raring to go. Both showed eagerness that was a far cry from their initial reluctance.

Even the editor madam that Darabsha writes for, wished him “Happy Holidays!” and not the usual, “Leave par jaoch? emm…?  Am toe office ma bhi su karoch. It is mostly a holiday to you anyways.”

A quick cuppa, a clean shave ‘n’ shower, and both men were ready and screaming at the ones they had promised to take-for-better-or-worse to hurry up. Soon Darabsha, Ruttimai, Sorabji – the tea-totaler, (he is a tea addict) and Perinbanus were on their way to the airport, to the long-planned holidays to Eastern Europe, the land of schnitzels, apple strudels and sacher torts, not to forget schnapps!

Formalities complete, and soon they were off. The wheels detached themselves from the terrestrial shores and were up, up, up to the celestial blue thundering away to Muscat about two hours away. An indifferent airlines breakfast was eaten with indifference; Sorabji was on his third cup of tea that he had somehow convinced the obliging stewardess to serve him. Darabsha disappointed, nothing with authority was served, not even beer. To crown his misery Ruttimae murmerred, “mare-re savar-na sara-saat wage koi pee-a kay, you sot!”

After having fortified themselves at a Food Mall at Muscat with dosas and Pavbhaji, Darabsha and Co. had to wait for about five hours for the next flight to Munich. Sorab downed few more cups of tea. The tour commenced and the women had already started splurging, having bought expensive sets of branded miniature perfume bottles. “Ai su?” asked Darabsha. “Aapri tour haju toe saru bhi nathi thai-ne paisa udaroch. Jara sambhali ne kharach karo ni.”

“Chalo bus chiba na thao”, retorted Rutti, “Jara sambhali ne kharach karo,” we hear this every day in Mumbai too, even when we buy eeda-ne-pao. So now stay put and leave us girls alone!”

After four more hours of wait, our intrepid travelers were finally on their way to Munich. After downing couple of scotch on rocks, a good lunch and watching with revulsion Sorabji slurping his umpteenth cup of sweet tea, Darabsha was fast asleep. His noontime siesta was sacrosanct. He woke up just when the plane started losing height and soon they were in Munich. It was about 8:00 pm but still sunny. En route to the hotel, the famous four had a glimpse of the BMW museum, a must visit when one visits Munich, and the Olympics stadium. They would visit these at close quarters at the end of their trip. A quick dinner of roast chicken, mashed potatoes, sauerkraut (the almost inevitable salad dish) was all washed down with dark beer. Sorabji wanted his sweet cuppa tea, but Perinbanu’s cold stare made him decide otherwise. Soon it was “gute nacht!”

It was 4:45am when Perinbanoo woke up – a pleasant morn of the approaching summer but for the four bawas from the tropics, it was ‘kakarti thandi’! Scrubbed and wrapped up in woolies, they went for breakfast – a hearty European affair. Several sorts of bread, ditto jams, variety of cheese, ditto butter, eggs, ham, bacon, salami, sausages, cereals, coffee, tea, orange juice, fruits and the best croissants they had ever tasted. Darabsha, a self-declared linguist told the waiter, “Geben sie bitte mein kompliment an den konditor” (Please offer my compliments to the pastry chef) in his broad sing-song Guajarati accented German. The waiter with a straight face replied, “I speak English, sir.” A distinct giggle came from the girls who received dark looks from Darabsha. But, what a breakfast! It was served every day. Sated to the point of revulsion for food, they made a beeline for the bus to take them to Cesky Krumlov, about 297 kms. in the Czech Republic.

That night, Darabsha wrote in his journal. A smooth ride on incredibly smooth German roads; incredibly smooth to us, who are used to the rough and tumble of Mumbai’s lunar landscape. Our politicians go on foreign jaunts euphemistically termed as study tours, but none has ever come back with the solution to create the velvety roads as in Europe. Vehicles of all sorts, sedans, sports cars, minis, commercial transports, and BMWs, Mercs, Audies galore, all flowing smoothly and in a most orderly manner, sans the honking, the-middle-finger extended heavenward. I think the word I am groping for is ‘road discipline’ – something we never experience in India. There was picture-postcard-scenery everywhere – lush green fields, pockets of forested areas interspersed by towns and villages with Swiss Chalet-like villas painted mostly in pastel shades, having flower boxes on their windows and well-maintained gardens. A ‘refreshment-stop’ to relieve and refresh – get fortified with tall glasses of local beer – Deutschland is truly the Bieresland, the best beers, wow!

Rutamae wrote in her diary, “What a day! Very sleepy. Hope Darab does not try his Czech language upon anyone tomorrow. He might meet with violence from someone patriotic!”