It’s the sequel to the 2017 sleeper hit ’47 Meters Down’, where a couple of girls in a cage crash down into the ocean, with oxygen depleting. This one, for obvious reasons has a suffix: Uncaged. 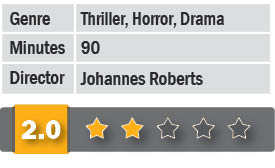 It involves four girls – twice the number, but with half the thrills and excitement.

Thus begins Roberts’s (co-written with Ennest Riere) ocean thriller in remote Mayan territory, replete with CGI-laden big, white sharks and human skulls and skeletons. The first few minutes in the water is inexplicably tedious to watch, with the viewer clueless as to the film’s way forward. The girls look aghast and terrified throughout the movie and those are probably the only emotions displayed by them. The big, white shark, blind due to overexposure of the sun’s rays (and clearly looking a cheap variety of CGI), swims dangerously close to the girls, evoking gasps from the girls and blank stares from the audience. The last few minutes redeem what is clearly a horror film one may miss.

Through most of the second half one gets the feeling that the director just threw the girls into the water and said, “Gals, hold on, I’m with the writers – I’ll soon find a way out!”