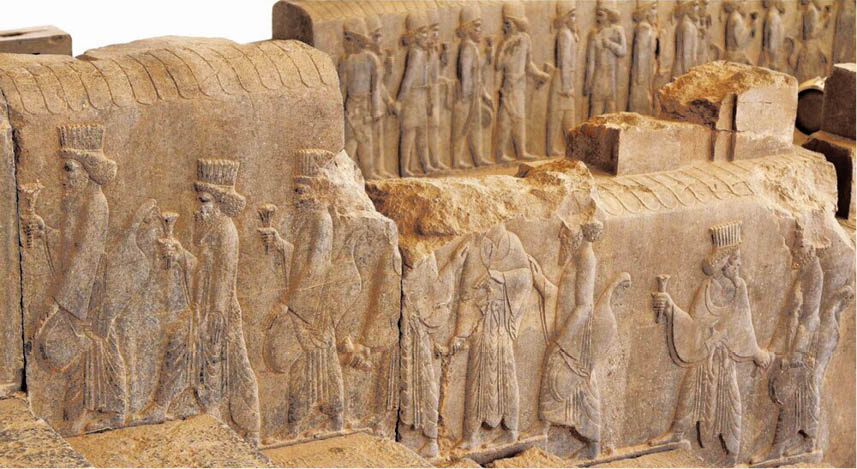 Visitors can observe finely crafted friezes along three major panels each divided into several tiers depicting sovereigns, dignitaries and the then visitors to Persepolis. The northern panel itself is divided into three tiers of well-preserved bas-relief figures of Persian nobility including the Imperial Guard and the Immortals.

On the upper tier, according to the Lonely Planet, the figures are followed by the royal procession, valets and horses of the king’s chariot; on the lower two tiers these figures precede Persians wearing feather headdresses and Medes in their round caps. The central panel of the staircase is dominated by traditional symbol of Zoroastrianism which is flanked by two winged lions with human heads.

Elaborate panels at the southern end of the staircase depicts a record of nations, showing 23 delegations bringing their gifts to an Achaemenid king. The Ethiopians begin the frieze in the bottom left corner and are joined by Arabs, Thracians, Kasmiris, Parthians and Cappadocians. The Elamites, Egyptians and Medians occupy the panel at top right. Accompanying this pantheon of guests are an assortment of delicately carved sheep with ram’s horns and curled wool, two-humped Bactrian camels, oxen and mules. 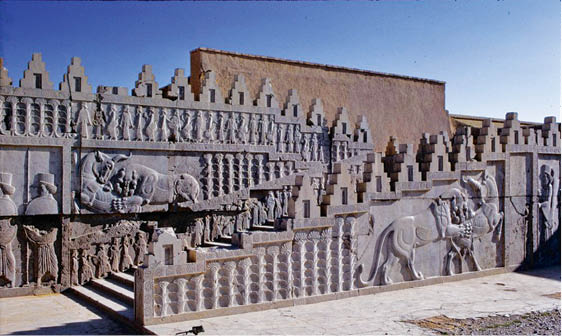 On the northern panel exists inscriptions with fairly stereotypical texts by king Xerxes; one in Old Persian and others in Elamite and Babylonian. According to livius.org, a website on ancient history written and maintained since 1996 by the Dutch historian Jona Lendering, parts of the inscriptions read:

“I am Xerxes, the great king, king of kings, king of all nations, having various kinds of people, king in this great earth far and wide, the son of king Darius, an Achaemenid.”

In 330 BC, the staircase was miraculously survived the sack of Persepolis by the soldiers of Alexander the Great. The staircase is currently protected by a permanent shelter.

The ancient ruins at this site are stunning. Some of the ruins have been covered, which gives you a sense of the shape of buildings-especially when you view the site from up the hill from one of the tombs. On the ground, it does take some imagination to “see” the 100 column palace for example, but a good guide book helps a lot to aid that process. The exceptionally carved friezes on the Apadana Staircase, Xerxes Gateway and Royal Apartments were exquisite. Both the tombs up on the hill are very similar to the tombs of Jordan, at Petra.