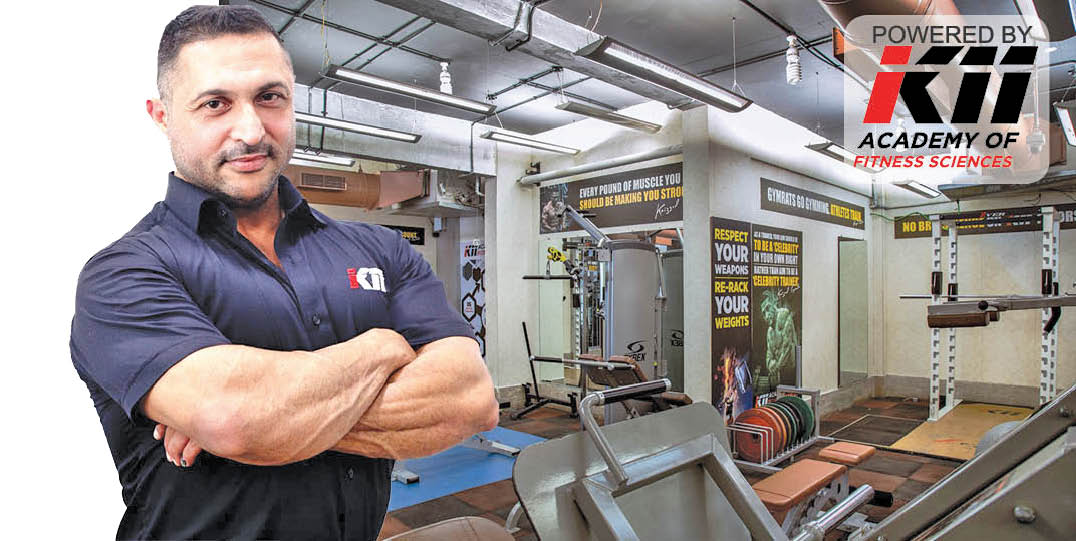 There are times when one receives news so overwhelmingly unacceptable that it is impossible to process or digest its reality. It leaves you numb and in a state of utter despondency just trying to come to terms with it. And that is how it has been for most who learnt of Kaizzad Capadia passing away on Wednesday, 13th October, 2021, due to Covid, at the age of 49.

We were heart-broken to share the shocking news of the sudden demise of our dear friend, Kaizzad Capadia – loved and cherished as the Founder, Managing Director of K11 Education Pvt Ltd, who headed the K11 Fitness Empire. He did the community and the nation very proud with his various achievements in fitness, globally. The entire fitness community is in mourning. Parsi Times was privileged to have him as our cherished fitness columnist and a genuine well-wisher.

Kaizzad passed away during the early morning hours in Pune, where he was conducting his classes. In the wee hours of the morning on the fateful day, he felt a little discomfort, but, according to Pune’s Sassoon General Hospital authorities, by the time Kaizzad was brought to the hospital, he had passed away. As per Indian Council of Medical Research (ICMR) guidelines, a rapid antigen test was done, which showed positive for Covid-19. The last rites were held at Kailash Smashan Bhoomi, in Pune and a prayer meeting was held on the 15th of October, 2021, at Lalbaug Agiari (Hilla Towers) in Mumbai.

India’s unparalleled Fitness Guru and Health Expert, and in every sense, the Nations Strength Coach, Kaizzad Capadia established the extremely reputed K11 School of Fitness Sciences – India’s foremost academic institution in the space of vocational education, which has built careers for a record 60,000-plus aspiring Personal Trainers; Sports Nutritionists and Fitness Professionals, over the last two and a half decades in India. Under his visionary leadership, K11 School of Fitness Sciences became India’s FIRST globally recognised Fitness Education provider in 2018, enabling K11 Diploma holders to practice professionally in numerous countries apart from India, without having to give any additional competency exams.

Revered as India’s first ever Professional Personal Trainer, Kaizzad has been the pride of our nation and our Community, having been a nationally ranked competitive Body Builder himself. He was the biggest proponent of Strength performance training with correct nutrition as mankind’s ONLY Anti-Ageing solution.

There was disbelief and shock among his students and friends, several of whom travelled from Mumbai to attend the cremation in Pune. Kaizzad had transformed the lives of many. Several Bollywood celebrities mourned his demise on social media. Fitness icon, Dr. Mickey Mehta shared, “He was one of the finest human beings ever – humble, simple, grounded – a perfectionist in his own right, and absolutely meticulous. A thorough gentleman and master of his craft, the leading Body-building Grand-Master. A world class educator with empathy and compassion. Strong and tough, yet soft at heart and pre of soul. May he rest in peace!”

In addition to having achieved national and global acclaim as a Fitness Icon, Visionary and Educator, Kaizzad Capadia, was, at heart, a teacher and in keeping with the challenges posed by the pandemic and the lockdown, he had launched his tech-savvy, ‘ATTEND CLASS FROM HOME’ (ACFH) module as he did not want to “delay the education that we owe our students,” in his words. He was extremely passionate about his students. “We are proud to share that 50% of our students come from other cities and even relocate to Mumbai to benefit from our education, with the understanding that this inconvenience will reward them manifold, with stellar careers in the Fitness Industry. 75% of all our students hail from Middle to Lower-Middle Income group homes,” he had shared. This was why the National Skill Development Corporation (NSDC), under the Ministry Of Skill Development and Entrepreneurship (MSDE), had trusted and invested in K11 to provide meaningful jobs to the youth. And K11 had come through, as always, with shining colours.

Not surprisingly Kaizzad was the recipient of innumerable awards, honours and recognitions – globally and nationally. These include the Rotary UHFF Fitness & Wellness Awards 2019, as ‘Fitness Icon’; by the Fitness Excellence Awards (FEA) 2018, for ‘Changing The Face Of Fitness Education’; by ‘The Economic Times Champion of Fitness 2017-18’ as a leading Educationist in the field of Fitness Sciences; by CIMS Medica in 2017 as ‘Pioneer in Performance Nutrition’; ‘Pride of India-2016 Award’ by the World Consulting & Research Corporation (WCRC)… and many, many, many more!

But, in addition to all his overwhelming and comprehensive achievements, Kaizzad, as a person had so much more to offer. He was one of the most compassionate people – with much love for animals; he actively helped the cause of community animals, taking them in when no one else would and passionately caring for them; an avid biker who was a leading proponent of biking with safety. He was a cherished husband to Kalyani, who he dearly loved and was his true and perfect partner in every sense of the word – through his multifaceted journey – in fitness, family, caring for animals, biking… et al. He would often express immense happiness at having found an equally amazing woman who filled his life with joy. And Kaizzad was a loving son and brother; a mentor par excellence to all his students; and an amazing friend, always ready to help one and all.

His life journey, in his words, “from being a 15-year-old, 49 kg skinny kid, hell bent on proving that I was not as weak and puny as I looked…” to becoming the nation’s founder of the Fitness Movement, is inspiring and sets the precedent for one and all on beating all the odds and achieving greatness. When asked what he would consider his best achievement to date, he had said, “To see my K11 students doing well in life, their gratitude towards my school for putting their lives on track, is my greatest achievement and provides me great satisfaction. Another one of my greatest achievements is popularizing strength training and the correct nutrition lifestyle amongst fitness enthusiasts in India.”

And he loved the community – a true Parsi who lived by the ‘Good Thoughts, Good Words, Good Deeds’ philosophy always. Sharing his take on the essence of Parsipanu, he had said, “Parsipanu – apart from standing for honesty, integrity, strong morals, ethics and principles, cleanliness, tastefulness – also at one point in time exemplified the physically strong, athletic Aryan genes. Body building, weight lifting, martial arts, cycling and sailing were dominated by our strong, athletic, genetically gifted Parsis during the 1960’s. We were also the leading entrepreneurs and philanthropists. Now we seem to be more about being the recipients of philanthropy rather than being the philanthropists. Both professionally and physically, we have suddenly become a lazy bunch. Instead of constantly bickering about our dwindling quantum, let’s focus on the dwindling quality! We were always a minority, but we stood out hugely. We need to wake up.”

We extend our heartfelt condolences to his wife Kalyani and all his family members and loved ones. May God keep his soul in eternal peace and give his family the strength to cope and heal from this sad loss.