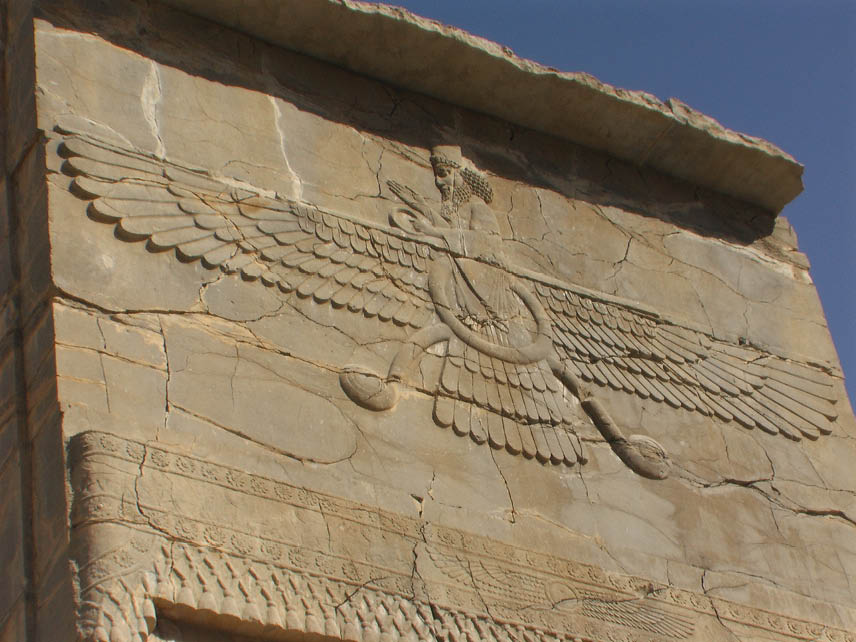 Dr. Nusly P. J. Pocha is a Family Physician commanding 52 years of successful practise. A Consultant Specialist in Aviation Medicine (having trained with USA’s FAA), he is the only Senior Aviation Medicine Examiner in South Asia, designated by the FAA; and a Consultant to various international airlines and Consulate-Generals in Mumbai. and does medical evacuation & transportation to countries, all over. He practises at the RN Gamadia Polyclinic (Tardeo) and can be reached at +91 98201 21201

In Iran, I saw the Farohar, proudly emblazoned on the Atash Kadehs in Tehran, Shiraz, Yazd and Isfahan. And, more importantly, in the arid, burning sands on a large plateau, it is emblazoned atop the massive columns at Persepolis. We revere this symbol to the extent that it is synonymous with our religion and yet not many of us on the trip were aware of the Farohar; its antecedents and its meaning; Nor were we able to understand why the mighty Achaeamenean Kings – Darius The Great, Xerxes, Artaxerxes – were sculptured on the massive columns and friezes, sitting on thrones or walking in processions, always under the Farohar’s benevolence and blessings. I wish to share the knowledge of this symbol with our community.

The Farohar comprises the figure of a man, holding a ring in one hand, with the other outstretched upwards. We see two large, out-spread wings, with three layers of feathers attach to the body at the waist, in the form of a winged disc. At its side are two streamers or loops. Below the torso, is a three-layered tail. The Farohar’s face is of a human being, to indicate its connection with mankind and the God-given right of free will. It does not matter which side the Farohar faces.

The outstretched hand pointing upwards, reminds us that we have to struggle to rise higher in God’s esteem. The other hand holds a ring – the ring of covenant, representing faithfulness and loyalty, which are the basis of Zarathushtra’s teachings and philosophy. Some scholars maintain that the ring signifies the cycles of rebirth on earth and after.

The magisterial wings have three main feathers to signify Humakta, Hukata and Huvarashta – Good Thoughts, Good Words, Good Deeds, which are the means for us achieve the flight towards advancement. The other part of the ‘Winged Disc’ – the ring in the trunk of the figure to which the wings are attached – indicates that our spirit is immortal, with neither a beginning nor an end.

Since our religion teaches us that Dushmakta, Dujakhta and Dujvarashta or Bad Thoughts, Bad Words and Bad Deeds should be kept as far away from our lives as possible, the other set of three layers of feathers signifying them are situated below the torso of the figure, in the shape of a tri-layered tail.

The streamers or loops on either side of the Farohar represent Spenta Mainyu and Angre Mainyu, the former directed towards the face while the latter is at the back; showing that we should always proceed towards the good and turn our back to the evil.

The Winged Disc was featured in early Egyptian designs as a sun-disc with wings, representing the hawk-god Horus; believed to incarnate in the Pharoah, and signified the Pharoah’s right to rule by divine kingship. In later Assyrian art, it had a similar significance. It was during the Achaemenids rule, at Persepolis, that it reached its fine perfection. Shown at most places in its full glory, in places it is found with its wings angulated, as if in flight and where lack of space necessitates, the human body is even omitted. The Winged Disc of the Persians above the King represented Royal Glory, and was called khvarenah in the Avestan language.

May the Asho Farohar be a symbol, a guide towards perfection and signify Pak Ahura Mazda’s blessings upon our people, our community, our Zoroastrian beliefs… Belief in Ahura Mazda and His bounty that allowed the Persian Empire of Cyrus and Darius to rise and expand to become the mightiest Empire known to man… belief to survive the depredation through the fall and destruction when King Vistasp was overthrown by the marauding Arab armies… belief to sail on uncharted seas and reach the shores of Sanjan and the establishment of sanctuary in India… belief, where we, though in small numbers, prospered and flourished, under the out-spread wings of the glorious Asho Farohar!