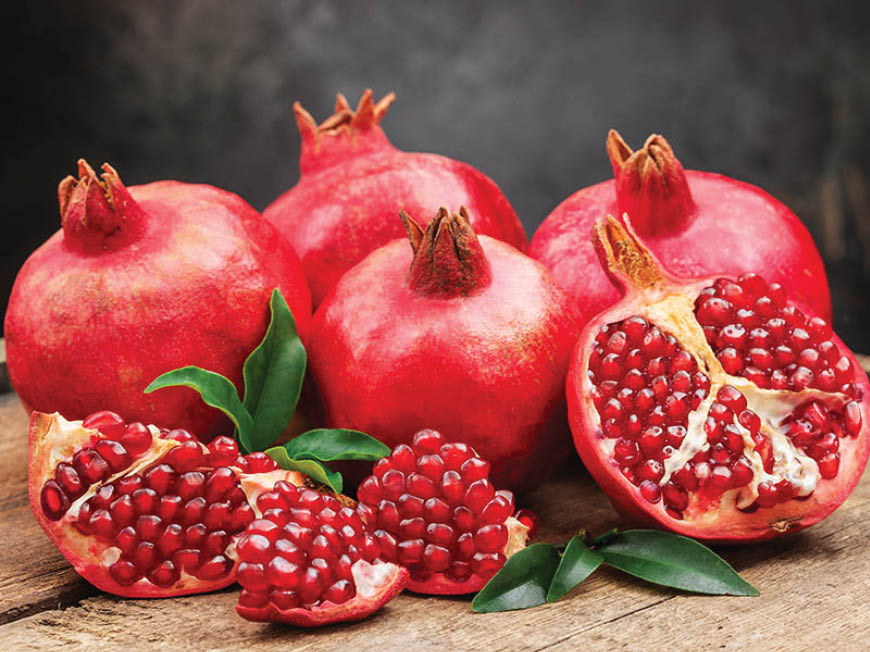 As per the Shahanshahi calendar, we are now in the holy month of Amardad (Avesta Ameretat), variously translated as immortality, eternity and wholesomeness. Amardad is the Seventh Amesha Spenta – Divine Energy/Force of Ahura Mazda, which Zoroastrians refer to collectively as the ‘Bounteous Immortals’. In Zoroastrian tradition, each Amesha Spenta has guardianship over a Good Creation of Ahura Mazda, thus representing the Presence of Divinity in the physical world. Ameretat or Amardad represents vegetation.

While all vegetation is worthy of homage, Zoroastrians consider the pomegranate tree very special. It’s referred to in the Avesta as Urvaram which means ‘The Tree’ or the tree that represents all sustenance providing vegetation on earth. Little wonder that the pomegranate tree is grown in the compound of virtually every Atash Bahram and Agiari/Dar-e-Meher in India and Iran.

Sacred Fruit: The pomegranate belongs to the Punicaceae family and is a shrub or small tree that grows between three to eight meters high and is evergreen in the tropical regions. Because the fruit’s juice is blood red in colour, it’s considered life-giving and the many seeds within the fruit represent fertility and immortality.

The pomegranate is used in various religious ceremonies and rituals and is an important adornment on the Navroze table and the Sagan ni ses in Zoroastrian homes. Generally, Zoroastrians thrust a silver coin half way into the fruit and consider it as a good luck charm for good health and prosperity. Not just the fruit, but even when going through the Nahan (ritual bath), one is required to chew the leaf of a pomegranate tree for purification.

In Iran, Zoroastrians also hang sun dried pomegranates at home for good luck and prosperity and on the longest night of the year (Shab-e-Yalda, which occurs around 21st December), families drink pomegranate juice or eat the fruit through the night vigil.

Ancient Zoroastrian texts prescribe that a few drops of the Haoma juice should be put in the mouth of a dying person. However, if Haoma juice is not available, pomegranate juice is next best substitute.

Asho Zarathushtra Consecrates The Pomegranate: According to the Pahlavi texts, Zardusht namag and Sharestan, Shah Vistasp once requested Asho Zarathushtra for a boon to see his place in the other world, to become immortal, to be able to look into the future and become invincible in war. However, Zarathushtra told Shah Vistasp that one individual cannot be granted all four boons.

Asho Zarathustra then proceeded to consecrate a cup of wine, a glass of milk, a flower and a pomegranate. He asked Shah Vistasp to drink the consecrated wine, upon which the King fell into a deep trance and his soul travelled to the spiritual world and saw his place there. The consecrated milk he gave Peshotan (the youngest son of Shah Vistasp) to drink and Peshotan attained immortality. Zarathushtra then asked Jamasp (a wise minister in the court of Shah Vistasp) to sniff the consecrated flower and Jamasp was blessed with the ability to look into the future and later wrote the Jamaspi, the book of prophesies bearing his name.

Finally, Asho Zarathushtra gave the consecrated pomegranate to Shah Vistasp’s son Aspandiar to eat, after which Aspandiar became ‘bronze bodied’ and virtually invincible in battle. Of course according to the Shahnameh, Rustom Pehlavan ultimately managed to kill Aspandiar by shooting a twin headed arrow into Aspandiar’s open eyes which were vulnerable because while eating the pomegranate, Aspandiar unknowingly closed both his eyes. This story bears resemblance to Achilles’ vulnerability in his heel.

Medicinal Value: In most eastern traditions, including Zoroastrianism, any plant of medicinal value is considered sacred. The Latin name of pomegranate is malum granatum, which means grainy apple. It is rich in flavonoid that protects one from heart disease, cancer and various inflammatory conditions. In Chinese medicine, it is regarded as the fruit for longevity.

In India, the pomegranate is regarded as a food-medicine of great importance. All parts of the tree – the roots, reddish brown bark, leaves, flowers, rind and seeds – have featured in Ayurvedic medicine for thousands of years. The bark, both of the root and the stems of the pomegranate tree, is well known for its anthelmintic properties of destroying parasitic worms. The root-bark is, however, preferred as it contains greater quantity of the alkaloid punicine than the stem-bark. This alkaloid is highly toxic to tapeworms.

Pomegranate peel has also been used in traditional medicine for treating diarrhoea and dysentery. Even today, in villages, a well-known kitchen remedy for loose motions is to boil pomegranate peel and drink the concoction. Pomegranate is now available virtually throughout the year.

During this Holy month of Amardad do eat it with reverence and may it grant you a long, healthy and prosperous life!