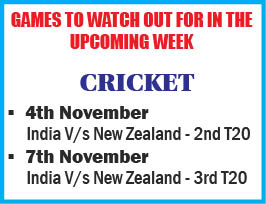 India Thrash New Zealand To Win 1st T20 In Style: Impressive bowling performances from Yuzvendra Chahal (2-26) and Axar Patel (2-20) coupled with great batting by Rohit Sharma (80) and Shikhar Dhawan (80) helped India clinch a 53 run victory against the Kiwis in the first T20. Batting first, India notched up 202-3 in 20 overs. Openers Rohit and Shikhar stitched a 158 run stand for the first wicket; skipper Virat Kohli contributed with a cameo knock of 26 in 11 balls. In reply, New Zealand were bowled out for a paltry 149-8 in 20 overs. Dhawan was Man of the Match. The match finished on an emotional note as veteran Indian bowler Ashish Nehra played the final match of his cricketing career after starting off in 1999. He took a lap of honour along with the Indian cricket team at the Feroz Shah Kotla stadium in Delhi.